The Environment Agency has recently responded to residents reporting odour nuisance from The Waste Transfer Station during the period August 2013 to August 2014.

I have identified the 2 biggest problems which cause odour nuisance - the design of the building and the nature of the waste received. The primary odorous source is the food waste contained within domestic refuse. The only possible way to remove that is for the local council to instigate separate waste collections for food waste, which would be a huge undertaking for them. I am planning to arrange a meeting with Brighton City Council in the near future to discuss with them whether this option is feasible/but I must stress it is not within my power to compel them to do this. Veolia would be happy with this option and have the facilities to do so if required.

The only complete solution

Veolia can offer the complete solution, which is separation of the food waste and composting it using an Aerobic or Anaerobic Digester well away people's homes.

The obstacle is our own Local Authority

It is hard for those Local Councillors and Council Officers who supported Hollingdean as the location for The Waste Transfer Station to admit that they have treated the surrounding neighbourhoods unreasonably. However, a half-way house would be consensus among Councillors from all political parties to agree to a change of policy so that food waste processing and glass-tipping take place away from people's homes. The 70% of black bag refuse which is non-food waste could remain at the Hollingdean WTS. Without the food waste,  more of this could be sorted and diverted into recyclables at the Hollingdean MRF, increasing our city's embarrassingly low recycling rates.

The turning point will therefore come when there is the political will to implement a change in Council policy so that services which entail good environmental practices are purchased from Veolia instead of cheaper ones which compromise air quality and public amenity (odour / noise / dust) in the neighbourhoods surrounding Hollingdean Depot.

The issues not yet satisfactorily addressed:

Read The Environment Officer's statement to this effect. 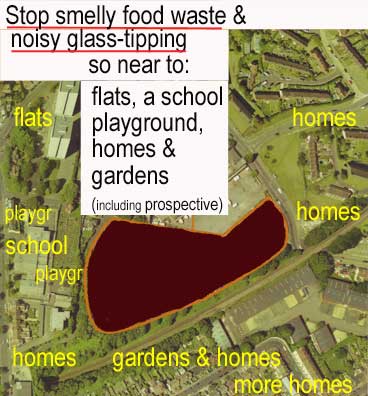 Brighton & Hove City Council presides over a city with two universities as well as one of the largest Community Voluntary Sectors in Europe. The latter includes a large number of groups which dedicate themselves to the betterment of the environment.

In this context, our Council ought both to invest wisely in the future and to be a leading example to other Local Authorities. A policy change is badly needed. All the time our Council finds other priorities, public health & amenity and residential environments suffer. If our Council's example is copied by other Local Authorities, The Environment Agency will need to divert more staff time to management of complaints rather than standing for best practice in the management of the environment.

Examples of poor practice which inevitably lead to complaints contribute poorly to staff morale among (i) those who have to work in facilities which cause odour nuisance to immediate residents and (ii) those who have to pick up phones at the Environment Agency and promise temporary fixes which time and time again prove ineffective (when the problem is as rudimentary as location and buildings which cannot contain the smell of rotten food).

The Environment Agency should actively discourage cheap solutions to managing waste which showcase pollution, creating an odour nuisance to Brighton residents in order to incinerate the food waste at Newhaven instead of using it to produce bio-fertiliser, renewable electricity &/or garden compost.

What to ask of our MP - Caroline Lucas

From the MP representing Brighton Pavilion Constituency, we need

What to ask of  our Ward Councillors

To reiterate: the only complete solution

Veolia can offer the complete solution, which is separation of the food waste and composting it using an Aerobic or Anaerobic Digester well away people's homes.

With the right representation, siting noisy/smelly operations near people's homes can be resisted. See North London example involving the Pinkham Way Alliance. Could two of the most anti-social operations at Holliingdean Depot - food waste processing (ODOUR) and glass tipping (NOISE) - be switched to locations away from residents' homes?

We in Round Hill will need to speak up to be heard, especially when some from all the parties represented on our Council can bring themselves to approve the siting of new homes (not yet built) just a few metres from the perimeter fence on the south side of Hollingdean Depot.

We are not alone in being expected to put up with these nuisances. See how The Pinkham Way Alliance, a group of North London residents, resisted a proposed Waste Transfer Station.