In response to a request made at our AGM, Councillor Keith Taylor reports that Brighton and Hove City Council will consider applications for new plantings, and for ongoing maintenance where there is a contribution from residents / traders. Current total cost is around £124 per tree. There are various stages in the process, such as location / underground service search / consultation.

Councillor Taylor suggests that we have a meeting with the arboriculturalist to discuss the way forward.

This does not help with the problem of the missing screen of trees on Network Rail's land. However, residents who have been in touch with Network Rail, reported at the AGM that there had been mention of the possibility of re-planting suitable trees. Residents who are willing to pursue this issue might find that Network Rail is willing to enter into further discussion.


What can we do about Network Rail's tree-felling? 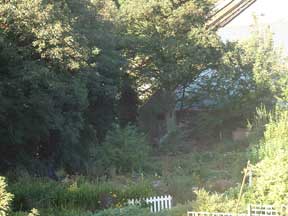 The NE edge of Round Hill Conservation Area in August 2004. Carelet set a bad example by removing the trees and greening on the eastern boundary (screening residents from the Centenary Industrial Estate) earlier in 2005. 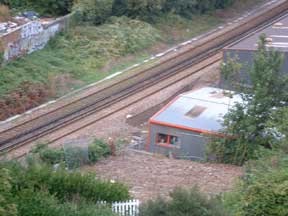 The same view after Network Rail removed the sycamores on the northern boundary [Sept 2005] subject to ruthless tree surgery by Carelet [June 2005] when all branches overlapping the developer's freehold were removed. Did new weight distribution really constitute a risk?

Network Rail has a Corporate Responsibility to consult community groups, government agencies and local authorities in the planning stage of any initiative, yet we know that they do not always do this.

They argue that "Safety overrides any other considerations" i.e. the Corporate Responsibility goes out of the window as soon as they have a safety argument.

Residents could ring the Network Rail helpline on 0845 711 41 41 or contact them via their web site at www.networkrail.co.uk to see if they have a safety argument. Some Princes Road residents remember receiving a letter of consultation earlier in the year, but nobody to my knowledge was aware of the extent of their operation. Residents can also write to Network Rail at 40 Melton Street, London NW1 2EE.

We must not confuse two separate campaigns, though it is possible that Carelet's ruthless tree surgery on the sycamore trees (and earthworks very close to them) provided Network Rail with a safety argument. By removing every branch overlapping their plot, Carelet left a row of trees where all the weight was distributed towards the railway track.

In a letter of comment (Feb 2005), among the 300+ relating to Carelet's first planning application, Network Rail (Southern Region) expressed concern that any buildings close to the boundary should not damage the roots of the sycamores. In spite of their proposals being unanimously rejected and their appeal being dismissed, Carelet has proceeded clumsily in an exercise of brinkmanship hardly designed to disguise their intentions. After the developer's site clearance in June 2005, Network Rail may have concluded that there was little other than a line of lopsided sycamores left to protect.

Has Network Rail proved a better neighbour? Their environmental policy states they will:

- assess the environmental impact of their maintenance and investment policy and take action to avoid or reduce adverse impacts to a practicable minimum.
- apply a consistent set of principles for the stewardship of protected heritage features and habitats under their care.

- be sensitive to people who are affected by the railway.

We could test out Network Rail's policy of reducing adverse impacts by calling their Helpline on 0845 711 41 41. We could ask if they have any contingency plans for re-planting to restore the screen they have removed from the NE border of our conservation area.

Carelet has set them a very bad example, but Network Rail's policy further states: "We are committed to developing our relationships with the community and strive to be good neighbours across the areas in which we operate." They have some convincing to do.

As one of their neighbours, I would observe that consultation was inadequate and if anybody learns whether they consulted the Local Authority, please update this page.

I am trying to see if there is any more we can do. In 2003, Steve McCabe, MP for Hall Green in Birmingham, put down an early day motion designed to force Network Rail to consult with wildlife experts and local residents before doing senseless damage. The Parliamentary debate on Steve McCabe's motion is posted at www.parliament.the-stationery-office.co.uk.

I have contacted Steve Marsh from Hall Green, who runs a campaign with the same goal - take the link to www.networkwail.co.uk and note the spelling change in the URL. I have sent him BEFORE and AFTER pictures of the destruction of the NE boundary of Round Hill inflicted by Carelet and Network Rail. I've also asked him whether Parliament's deliberations have led to any tightening of Network Rail's legal obligations.

The www.networkwail.co.uk link is the best I can find on the web. Part of Steve Marsh's campaign is to oblige Network Rail to carry out an Environmental Impact Assessment (EIA) prior to operations to take account of wildlife, local considerations (loss of screen, security) and danger caused by removal of vegetation (e.g. increased access to the track and subsidence).

At present Network Rail do not have a legal obligation to perform an EIA. Instead, they commission a company called ADAS to provide a 'hazard assessment'. The latter is performed by people who are not qualified to address the concerns covered by an EIA.

www.networkwail.co.uk also links to a report entitled Bare Necessity from The Guardian and a related item on tree felling by Network Rail from the BBC's 'Your Politics'. There is also a link to Network Rail's own leaflet in PDF Format explaining why some tree cutting is essential.