The Argus report on this meeting. 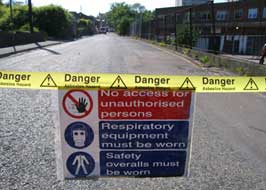 Neither Veolia's Environmental Services nor the Council's Environment Directorate were represented at the meeting, though a photographer from The Argus was present. After succumbing to several close-ups, Diana Leach got the meeting under way.

Info RE: the nature of Veolia/Onyx/Vivendi

Sandra Staufer commented on Veolia's poor start in fufilling its duty to inform local residents of what was going on during the demolition process. Many of the residents in the tall blocks (comprising 175 flats) overlooking the development site did not receive Veolia's glossy leaflets. Those that did found that even the most obvious concerns were not addressed. When was it safe for flat-owners to open their windows and on which days would it have been a good idea to close them?

Debbie Spellman has already received publicity as she has decided to keep her daughter home from the Downs Infant School since testing for dangerous hydro-carbons was not completed in advance of the demolition work. The school playground is just 12 metres away from the intended site of the Materials Recovery Facility.

Ed Start explained why the Dump The Dump was no longer able to mount a legal challenge to the Council's decision to approve the Dump.

Such a challenge could only address the legality of the planning process and not the merits of the case. Ed lamented the failure of several members on the Planning Applications Sub-Committee to consider important concerns and their lack of preparation (e.g. they had not even visited an up-and-running installation similar to Veolia's proposed WTS & MRF) before making a decision with a massive impact on neighbouring communities.

Obtaining legal advice warning against the costs of a legal challenge and the improbability of success, has itself cost The Dump The Dump campaign £2,500. Printing posters and leaflets is also costly. The campaign now has a deficit of £4,000.

Helen Wier explained why fundraising was now very important, not only to clear this debt but also to regenerate the campaign.

An individual challenge from a resident who qualifies for Legal Aid (and who does not wish to have too much publicity) is being mounted. No mention was made of the likely sum of Legal Aid which would become the budget for this challenge. Veolia and the Council are likely to have access to greater resources.

The future of Veolia's installations at Hollingdean is directly linked to the outcome of their attempt to build an incinerator at Newhaven.

The Defenders of the Ouse Valley Estuary (DOVE) campaign was also represented at the meeting and they plan to cycle & motor from Newhaven to Brighton on Sunday 10th December 2006 to arrive near the fountain (just south of North Road: the green between the King & Queen Pub and the Art College in Grand Parade) at 13.30.

If this is how they vote, how should we vote?

Ed Start also reminded us of how members of the planning applications sub-committee voted, but left it to his audience to decide how to cast their votes in the Council Elections next spring. The Dump The Dump campaign had succeeded in drawing in a massive 2182 letters of comment.

It was noted that Veolia's proposal went far beyond providing for the needs of all Brighton and Hove's residents. Last years figures reveal that the throughput of rubbish from Brighton & Hove's residents actally fell to 122,000 tons per year.

In making its case to locate the dump on a single site right in the heart of several residential communities, Veolia was very ready to quote the proximity principle: i.e. "rubbish should be dealt with near to where it is produced". If the throughput at Hollingdean Depot does not exceed 122,000 tons per year (or less if our city succeeds in cutting its production of waste and increasing its recycling), then there is still the injustice of all Brighton & Hove's rubbish being dealt with at a Waste Transfer Station on a single site, not to mention the injustice to the people living in the villages of the Ouse Valley and the town of Newhaven where the rubbish will be incinerated.

Those who are telling us "Where else can Brighton and Hove's rubbish go?" should support the Dump The Dump campaign in ensuring that rubbish is not imported to Hollingdean from outside the Brighton and Hove area and that capacity never exceeds the rubbish that our city is producing. Veolia has planned for nearly twice the capacity which would be compatible with any proximity principle.

Although the Dump The Dump campaign has lost an important battle, we are still yet to suffer the full effects of a proposal which still contains many impracticalities. Traffic flow through a Victorian railway bridge and air quality management around Hollingdean and the Lewes Road Gyratory are STILL major concerns. This is good reason for not allowing any increase in the plant's working capacity. Councillors may soon have to reflect on the wisdom of Veolia's proposal when the people they represent suffer the instrumental test and traffic gridlock together with these increased risks to safety and health are experienced.

Background on The Dump 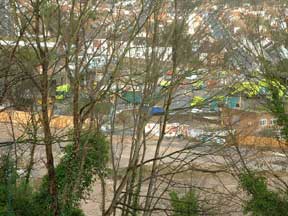 New playing fields for Hollingdean? No such luck!