A bad summer for local democracy
[2 of 11] Veolia's planning proposal to operate the municipal WTS and MRF for up to 15 hours a day for 363 days per year was granted by the Planning Committee at their meeting on Wednesday 7th August 2013.

5 IN FAVOUR
4 AGAINST
3 ABSTENTIONS

As could once be viewed on the Webcast of the Planning Committee Meeting Councillors Gilbey, Hamilton and Wells stated that they were voting AGAINST. All three of them felt that further operation of the WTS & MRF was unreasonable at weekends & on bank holidays.

Glass tipping nuisance likely to remain if we don't act

Cllr Linda Hyde, once a Round Hill resident, succeeded in getting a condition attached to Veolia's permission regarding the removal of glass from the site at weekends, though not affecting delivery of glass or tipping it around within the site.

When we complained about noisy glass-tipping on Sunday 26th May 2013 (one of the two May Bank Holiday weekends which Clarke Saunders Associates left well alone in gathering acoustic data between March and July 2013 for their Noise Impact Assessment in support of Veolia's application).

We were told that the glass was not being delivered or taken away, but was merely being moved around within the site to create space for a maintenance operation. Veolia insisted that there had not been any breach of a Council planning condition. However, the terms of Veolia's licence from The Environment Agency prohibit 'unreasonable noise'.

Councillor Mac Cafferty, who chaired the meeting, dismissed concerns about a possible expansion of the facilities in the future (given extra hours to operate) by repeating that "The maximum permitted tonnage would remain unchanged" . However, this mantra would only have addressed the extra concerns (caused by Veolia's application to residents living near Hollingdean Depot) if the noisy WTS & MRF installations had already been processing 160,000 tonnes per annum - the maximum tonnage permitted. Hollingdean Depot has never been running at this capacity, but still causes unreasonable nuisance to residents. The sourcing of black bag waste (with food mixed in) and recyclables (including glass) is not limited to the city of Brighton and Hove. Waste and recyclables are also currently sourced (for profit) from other parts of East Sussex as well as from places in West Sussex.

Elimination of the 2006 protections RE weekend working

The Chair's repeated reassurance about maximum permitted annual tonnage as a justification for increasing operating hours did not address our wish not to have (a) the prospect of industrial noise nuisance (and Heavy Goods Vehicle movements for those living in parts of Hollingdean) extended to 15 hours a day and (b) to have periods of respite from industrial noise (& HGVs in Hollingdean) during late evenings and at weekends and on Bank Holidays.

Councillor Bowden reminded his colleagues that they had recently voted to grant permission for Carelet's 6 three-storey houses to be built even nearer to Hollingdean Depot than the homes of existing residents in Princes Road.

How much noise did members of the planning committee hear on their afternoon site visit on Tuesday 6th August 2013?

Councillors were divided as to how much noise they heard on their site visit. One mentioned a suspicion (reported to her) that Veolia was keeping the noise down to coincide with the site visit; another could clearly hear industrial noise. Veolia's facilities will not go away, but what did transpire is that the acoustic data used as evidence in support of the application for 363 day a year (15 hours per day) operating hours was collected externally i.e. from outside of residents' homes and gardens. Two Councillors queried the relevance of taking acoustic measurements from as far away as Richmond Road. No acoustic readings were taken from within the homes and gardens on the north side of Princes Road.

How robust was the noise impact assessment?

Veolia's Noise impact assessment, credited as 'robust' by The Council's Environmental Health Department, was based entirely on external acoustic readings i.e taken outside of residents' homes & gardens and quite some distance away from Hollingdean Depot. In Round Hill these were taken from (Position 3) Richmond Road/D'Aubigny Road and (Position 4) Wakefield Road / Richmond Road / Princes Crescent.

The Council's Legal Officer justified this to members of the planning committee by stating that it was the practice to take acoustic readings 'externally' i.e. from outside of homes and gardens.

However, I recall that the practice was different when the developer Carelet proposed to erect homes on the greenfield site to the north of the building line in Princes Road. Recordings of noise from Hollingdean Depot were taken from within Carelet's site (to the north of the houses in Princes Road) as recently as 10th April 2013. See page 12 (of 40) in 7th Wave Acoustics Noise Impact Assessment 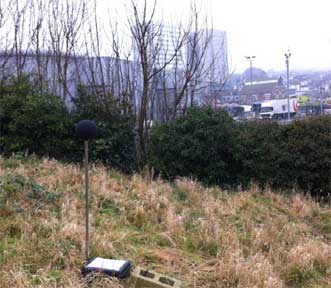 Other professional assessments measuring noise from Hollingdean Depot with microphones positioned on the green vista to the north of Princes Road were performed in 2006 (i) from within my own garden prior to Veolia's application for their WTS & MRF in 2006, and (ii) from Carelet's site both in 2006 and between 27th May and 2nd June 2009. See page 18 (of 35) 2009 Anderson Acoustics - a 7-day log of Continuous Noise Monitoring . This shows the microphone position on the site map, well to the north of existing houses in Princes Road.

Unfair haste - 103 objections - NOT 18 Veolia's application first came to my attention on 11th July 2013. The letter of consultation from The Council was dated 9th July 2013.

I understood that it was normal to allow a period of 21 days for a public consultation, starting from the time when the residents mainly affected receive letters of consultation.

Since the cut-off date on the letter was clearly given as 30th July 2013, I led other residents (via The Round Hill Society's website) to believe that this was the case.

The Plans List, was uploaded to The Council website on Tuesday 30th July. I mailed my own letter of objection on Monday 29th July using first class post and a large letter stamp to ensure that my representation arrived on the final day of the public consultation, but The Plans List had apparently already been completed.

A poor & incomplete summary of our objections In reporting objections to Veolia's proposal, the latter merely contained a lame summary of 18 early objections. By the date of the planning committee, the number of objections had risen to 103 and there were far more arguments to draw from. At the planning committee meeting itself, the Case Officer stated that the 40 objections received after the production of the "late list" (not posted online), contained no additional arguments. My wife and I are among those residents most badly affected by Veolia's proposal due to the proximity of their Hollingdean Depot installations to our home and garden. Although we both submitted well written objections within the formal period for public consultation, they were not processed by The Case Officer before The Plans List was hastily finalised and our comments played no part in the 13 badly written bullet points which were offered as a summary of merely 18 out of the 103 objections finally counted.

Compare these 13 bullet points with the 8 bullet points in our campaign flyer and decide for yourself if a better summary of the objections could have been presented.

The Plans List is published online usually about one week in advance of the planning committee meeting. Its importance is that it is the document which press, public & councillors can access to aborb BOTH sides of the case within a reasonable time period.

News outlets such as Brighton and Hove News are still reporting that there were 18 objections to Veolia's proposal. By the date of The Planning Committee Meeting on Wed 7th August 2013, The Council had received 103 objections. The haste with which The Plans List was finalised, meant that several objections which were "not late" and should not have been demoted to "the late list" were not available in advance of the meeting for press and public to absorb. This was the quickest dash (from formal public consultation period to planning committee meeting) that I have ever known.
NEXT 3 of 11: Veolia proposal - a rushed public consultation