If the links to the Noise Impact Assessment on this page return
"the document is unavailable for viewing at the present time:
1. Take this link to the documents tab of BH2013/02219
2. Access the "Noise impact assessment" from the list of documents under 3rd July 2013. Click on adjacent icon in the "view" column.

Only ONE logical connector ("as" meaning "because") is used throughout the bullet points. See the third bullet (below). And this has been used ungrammatically.

the 8 bullet points within our campaign flyer 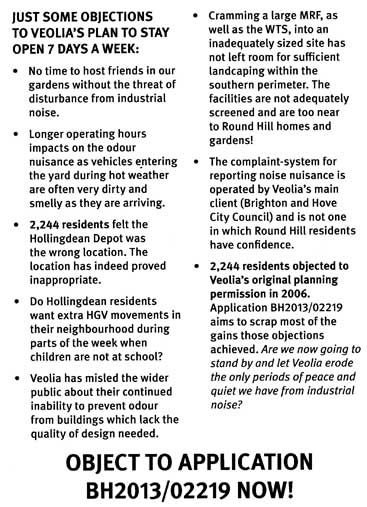 The officers and The residents Officers - given access to 'argument using complex sentences'
Residents' objections - poorly summarised by The Case Officer using 'simple bullet points containing no logical connectors' (except for ONE used ungrammatically).

How robust are their arguments?Their arguments express personal satisfaction in the planning application and credit Veolia with foresight, but there is no effort to investigate whether justification for eliminating the conditions protecting residents' amenity is based on selective collection and use of data: The Plans List - point 5.14 In summary, from a noise perspective, I am satisfied that the applicant has had the foresight to use a professional consultancy to gather acoustic data over relevant periods including bank holidays which appears to be robust. The Council's Senior Environmental Health Officer received a complaint from our household about the dreadful noise we were subjected to during the 25-27 May bank holiday during which Veolia was permitted to do catch-up work following industrial action.

See Our own records of nuisances from noise and odour during May, June and July 2013

Selective recording and use of acoustic data

The acoustic data referred to in point 5.14 (above) cannot have referred to either of the two May 2013 bank holidays, though data was gathered both during earlier and later periods. The earlier period included the quieter Easter bank holiday. A robust survey would not use relatively quiet and very noisy bank holidays so selectively.

How many complaints has The Council actually received about noise from Hollingdean Depot?

A complaint is not a complaint until it is "a recorded complaint". It is not up to the victim of noise nuisance to define "a recorded complaint". We were told (following our May 2013 complaint) that if we wanted our complaint to be recorded, we would be expected to keep a 2-week noise diary (I've previously submitted an 8-day diary) and risk the cost of a noise abatement action in a magistrates court.

We read in Veolia's application (see page 2 point 2.1.1 of Noise impact assessment dated 3rd July 2013) that no noise complaints (Hollingdean Depot) have been recorded by Brighton and Hove City Council (persumably by their Environmental Health Department) since 2010.

As residents who complained to The Council's Environmental Health Department about grossly unreasonable noise levels as recently as Sunday 26th - Bank Holiday Monday 27th May 2013, we know what "no recorded complaints" really means.

Making industrial noise the focus of our lives

Writing so much about the problem on this site is stressful.

I have already completed and submitted an 8-day noise diary after complaining to The Council's Environmental Health Department. The requirement is now 2 weeks before The Council's Environmental Health Department is willing to actually record my next complaint. If I comply and then have occasion to complain a third time, how much of my life will I spend focusing on something both I and my wife desperately want to forget?

Is the Council willing to solve the root of the problem?

Round Hill residents (indeed most people in Brighton and Hove) know full well that the root problem of Hollingdean Depot as a site for municipal waste processing is its location. Unless the facilities are downsized (e.g. glass-tipping and food processing taken to a more suitable site) then The Council's Environmental Health Department is not going to be able to do more than repeat its complaint minimisation strategies on successive occasions when the inevitable nuisances occur.

See you in Magistrates Court at your own risk

Sending us documentation (see Private action to abate a noise nuisance) advising us of the possible legal costs of a noise abatement action, gives us no motivation to pursue complaints with Brighton and Hove City Council.

Do members of the planning committee know?

The practice of throwing out disincentives to 'residents with legitimate complaints (who don't want to take on a Multi National Company in a Magistrates Court)' was NOT explained to members of the planning committee (see Webcast of the Planning Committee Meeting). When the Council's Senior Environmental Health Officer is asked about his willingness to follow up residents' complaints, instead he responds with a string of reassurances.

[b] the unreasonable duration & frequency of noise nuisance

[c] the irrelevance of the monitoring locations used by Veolia's acoustics specialists, which were quite unnecessarily removed from the nuisance sources of the WTS and MRF
[a] Character of noise

Nowhere in the The Plans List or the summary of our objections is there any description of the unpleasant mix of noises which residents have to endure (for 363 days a year now the application has been granted). banging / echoing / rumbling within the MRF & WTS, glass-tipping, high-pitched hums / high pressure cleaning equipment / loud beeps from vehicles & machinery within the yard / "ATTENTION...VEHICLE REVERSING!"
[b] Duration of noise

It is not so much that the industrial noise is any louder than a passing train when measured in decibels. It is the fact that a mix of noises which most people would find very objectionable in the context of their homes &/or gardens is continuous and goes on for so much of the day. The certainty of at least a few periods of rest from it, even if merely at weekends and Bank Holidays is very important to our environmental health. I don't think this is considered in the The Environmental Health Departments paragraphs justifying the application. The bullet points summarising our objections fail to convey the logic of a very reasonable request. By stripping our arguments of any logic, these simple sentences represent us as "moaning minnies".

The Noise impact assessment prepared for Veolia was described by The Council's Environmental Health Officer as "robust" without any of the critical appraisal offered by Councillors Hamilton, Wells and Hyde at The Planning Committee Meeting. At least three of the elected Councillors drew attention to the distance of the monitoring positions selected by the acoustic monitoring company from the Hollingdean Depot site.

No microphones were located within the homes and gardens of the residents' affected by industrial noise (i.e. behind the line of houses on the north side of Princes Road). Monitoring positions from within Round Hill were from Richmond Road/D'Aubigny Rd near to the Centenary Industrial Estate, and from Wakefied Road/Richmond Road/Princes Crescent a wholly residential area. See page 11 point 5.3.1 of Noise impact assessment. 'A set of smokescreens' or 'robust scientific data'? Whenever, a member of The Planning Committee suggested a planning condition such as visual screening of the Dump or limiting the movement of glass around Hollingdean Depot on Sundays and Bank Holidays, the Council's Legal Officer quickly stepped in to question the relevance of the suggestions to the application and to ask whether they were reasonable. The same Legal Officer omitted to question the relevance of a Noise impact assessment which took soundings from locations so far from the nuisance sources that noises from other sources were bound to be prominent. The choice of monitoring locations seemed more about the creation of 'smokescreens' for comparing decibels than a relevant and reasonable scientific exercise.

Further smokescreens used to justify extra noise See page 1 point 1.1 of Noise impact assessment, were an abattoir which closed over 25 years ago (and therefore had no relevance whatsoever to the collection of acoustic data in 2013), a noisy meat market which might better be moved to a more hygenic location than next to the Municipal Dump, and The Council City Clean Depot which itself is a source of considerable noise nuisance which both Hollingdean and Round Hill residents would like to see addressed.

However, is there any hope of addressing the above issues when our Council's Environmental Health Department praises a Noise impact assessment which argues that one disturbance justifies another?
NEXT 5 of 11: Local democracy and The Dump