From thorn bushes to pullovers

by Vivien Eliades The Round Hill Reporter March 2009 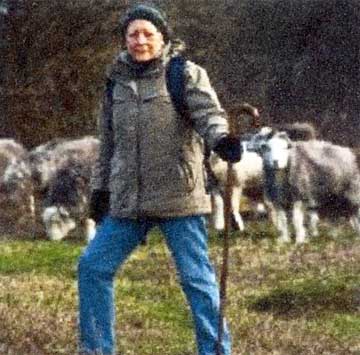 Last year, I decided to join a volunteer group. I’m a member of the Sussex Wildlife Trust, so I started with them but they discourage people from travelling long distances and gave me a couple of numbers in Brighton, one of which was the Brighton Conservation Volunteers.

The BCV go out on Tuesdays, meeting on the North side of the Level in Union Road at 9.30am and leaving promptly at 9.45 in a red minibus. The work is varied; mostly scrub bashing in the winter, and we’ve done stream clearing, stile building and tree planting. The first time I went out I ached for a couple of days—it’s pretty hard work—but I had a great feeling of accomplishment and well-being.

All the tools (bow saws and loppers mostly) and gloves are provided, as well as biscuits, but you have to take your own lunch and drinks. They aim to be back in Brighton by around 4pm. If you’re interested in volunteering, you can get more information online at www.bcv-online.org.uk and you can contact the BCV on (01273) 736135. You don’t need any experience, but you do need to be fairly fit and wear strong shoes and outdoor clothing.

After we’ve cleared the thorn bushes and brambles, sheep are brought onto the site to finish clearing, crop the grass and manure the land. I heard that volunteers would be needed to keep an eye on the sheep, so I went on a course to learn how, and am now a “Lookerer”, a person who watches the sheep.

Whilst on the course, I learned that sheep fleeces don’t fetch much money and I thought it would be great to get the fleece spun and knit it into a jumper, so the farmer gave me a couple of fleeces. I hadn’t a clue what to do with them, so I contacted the East Sussex Guild of Dyers, Spinners and Weavers.

It seems that it’s quite a time-consuming process to spin a fleece and the more I learn, the more interested I’m becoming. I’ve met two members of the Guild and we’ve decided that Brighton needs a spinning group. If you’d be interested in joining such a group as a novice or experienced spinner, please contact Sue Craig on info@knittingthemap.org. 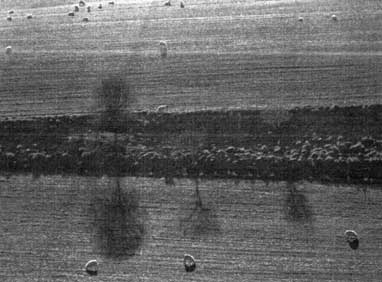 (For several year, Vivien shepherded The Round Hill Society as both its secretary and newsletter editor. We all move on, though not all to sheep!)

See also Daily Mail report: Life of an urban shepherd
Why so many volunteers are flocking to tend sheep. 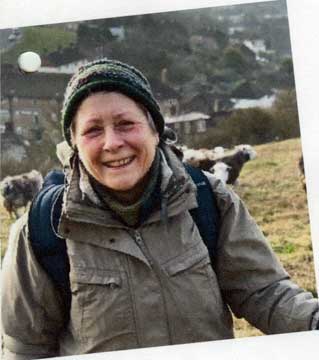 This is my third year as a volunteer shepherd and I help to keep an eye on the sheep that graze the Downs near Brighton.

I decided to become a 'lookerer' when I was helping to clear scrub in Wild Park in Moulsecoomb. I was volunteering with Brighton Conservation Volunteers when I overheard David Larkin, the ranger, say that he would be bringing in sheep to protect the grassland, and he was looking for volunteer shepherds. I am a keen knitter, and the idea of clearing the land, keeping an eye on the sheep and knitting a jumper from their wool appealed to me. I was one of the first people to be trained.

The chalk grassland around Brighton is kept under control by flocks of sheep. Without the sheep to keep them down, bushes would grow and the land would turn to scrub.

I go out once a week early to check the sheep. I check their fence, and if their water is frozen I break the ice. I check that they are all still alive and that none are limping. If I find a sheep lying on its back, I have to get it upright - they're unable to do it themselves and would die if they weren't helped to stand.

Dogs can be a problem but most owners are responsible and it is good to know that some of them keep an eye out and report to us if they see anything wrong.

I moved to the Round Hill area 17 years ago. It has a real feel of community, with wonderful neighbours, our own newsletter and community group (The Round Hill Society), which was founded in late 1999 - I was secretary of it and also edited The Round Hill Reporter for several years.

I am a keen reader so I use the library and sometimes meet a friend at Brighton Museum for a delicious lunch.
This page was last updated by Ted on 16-Nov-2013
(Registered users | Amend this page)