by Jan Curry from The Round Hill Reporter September 2008

Night Crawler—the name for a worm in earlier times. I prefer earth worm, especially as earth worms should be our favourite garden friends. Without them we would all be in a bit of a mess.

Birds are delightful to watch but it is a bit difficult to feel warm about earth worms and yet if all the birds flew out of our gardens tomorrow, our green patches would be less interesting but they would survive. If worms went, our gardens would cease to function in just a few weeks.

Don’t panic (yet)! They’ve been around a long time, about 120 million years and individual worms barring accidents, can live for ten years or more.

I have read that, if conditions are good, an area of natural grassland (no poisons, no pesticides or lawn mowers) the size of a football pitch may contain five million worms and between them they will shift 8-18 tons of soil a year. In a fertile garden, a spadeful of soil should contain six or more worms. If there are fewer than that, dig plenty of organic matter into the earth to improve fertility because worms and soil organisms — bacteria — need fallen leaves, dead plants and compost to survive. 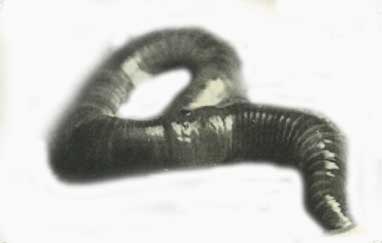 Worms are great soil improvers: the material they drag down into the soil is attacked by bacteria turning the leaves etc. into humus—fertile soil. Their underground tunnels stop soil compacting and help drain rain down to the roots of plants and trees. Unlucky worms in turn feed hedgehogs, badgers, some birds and unfortunately provide bored cats with wriggly playthings.

Make friends with your worms. They have no eyes or ears but are blessed with seven hundred taste buds on each square millimetre of body—they are very, very sensitive to vibrations—well they would have to be, wouldn’t they? Incidentally, an earth worm has both male and female organs, but it still takes two earth worms (usually) to make more earth worms. I guess with no eyes or ears and living mostly underground, it is useful to mate with the first earthworm you meet—clever stuff.

If, really at the end of a long school holiday tether, you could suggest to your family—tap dampish ground with a stick to imitate the sound of raindrops and see who entices up the most worms. (Have you seen seagulls stamping on grass? It’s called ‘puddling’— they are doing the same thing but they eat them.)

If this sounds very tedious, think of Charles Darwin. After he wrote “On the Origin of Species”, he retired and spent the next ten years—yes ten years!— researching the anatomy and behaviour of....earth worms.

Go on! Spend a minute or two puddling.

(Dear Editor, get the spelling right—’puddling’ not ‘piddling’!)
This page was last updated by Ted on 10-Nov-2013
(Registered users | Amend this page)