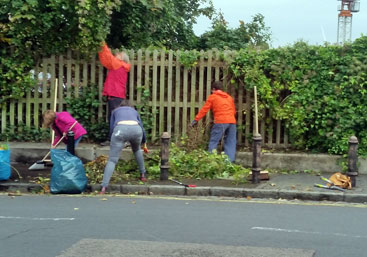 This is one of the usual sites for cutting back overgrown vegetation. Other teams of volunteers worked elsewhere in Round Hill, for example around Richmond House. The Cat Creep and the tree at the west end of Round Hill Crescent received attention too. 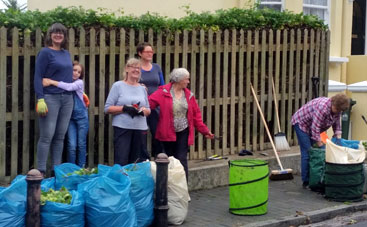 Note: while it creates an accessible seating area for parents supervising Play Street to have the street side of the fence free of vegetation, volunteers were careful to leave a screen of ivy and other vegetation on the far site of the fence to separate the conservation area from the Centenary Industrial Estate - a view not wanted by most residents  living in Round Hill.

Thank you to Annie for the three photos and to all who participated. We hope to see new faces at our next clean-up. Children are especially welcome in the company of adults.

Sharing the experience of a community clean-up ranks high in environmental education and could lead to your children tidying spaces of their own!

Thank you, Miriam for the seasonal posters. There is a good smattering of autmn leaves in corners of our neighbourhood where we still have trees e.g. the junction of Princes Crescent and Wakefied Road.

If you missed our 2018 Spring Clean-up, you were not alone because it was cancelled due to snow. No snow is forecast for 14th October so find your gardening gloves & secateurs and get out there and meet your neighbours. 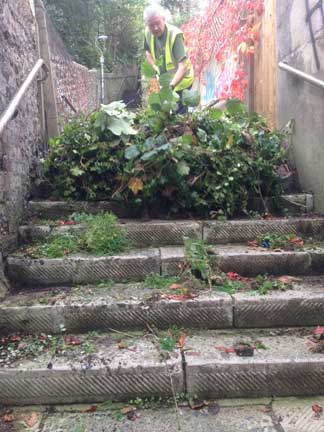 My single picture of the Autumn 2016 Clean-Up did not improve on the one above from a previous year taken by somebody else.

On the latest occasion, Rob Stephenson and others spruced up the Cat Creep steps. Further volunteers were stationed in other Round Hill hot spots prone to overgrown vegetation &/or occasional dog fouling.

The help which we received from City Clean was well up to standard. We were able to load cuttings straight onto their vehicles, which saved the use of too many plastic bags.

Two regular spruce-up sites were [1] the junction of Princes Road and Mayo Road. Vegetation was thinned out on & around the low wall, which forms a perfect seat for watching Play Streets or taking a rest when walking the dog. [2] at the bottom of Wakefield Road (to the east) where a lot of clipping is usually needed at this time of year.

Dog stencils were also renewed , now a regular task during our of Clean-Up events.

The support of City Clean provides a valuable link between us and them. They supply litter pickers, rubbish sacks etc and, most significantly, carry off all the rubbish we amass.  We also know the neighbourhood's regular street cleaner. This degree of liaison is very helpful when issues to do with cleaning (a common concern) crop up. 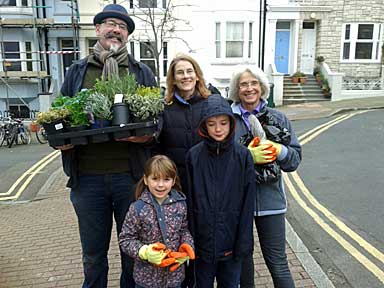 Although turn out from residents (and committee) was lower this year, it was still a very successful clean up, thanks in great part to City Clean. 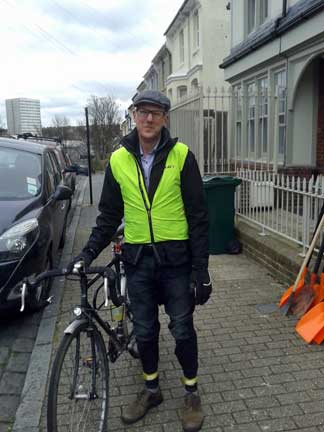 Trevor and Eduardo supported a valiant RH team of rubbish collectors - with very nifty litter picking by the younger members of Roundhill - by taking away loads of rubbish. Adam contributed some lovely herb plants which were added to the planters at either end of Roundhill Crescent along with some Nasturtium seeds. City Clean's graffiti team were active, painting over lots of tagging ( but the large wall along Upper Lewes Rd remains a problem). Thanks to our ward Councillor Pete West for turning up to provide encouragement. 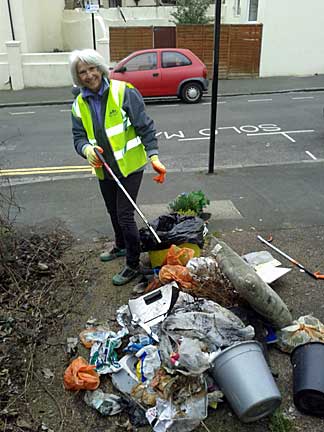 If any residents would like their old (round and usually lidless) black rubbish bins replaced with nice new green lidded wheelie bins for free, then just let me (Annie Rimington) know (contact details are on the printed Round Hill Reporter). That way the gulls can't get at the rubbish and the rain doesn't get in, making the bins smell and too heavy for refuse collectors to empty them.

Reports on previous Clean-ups in Round Hill 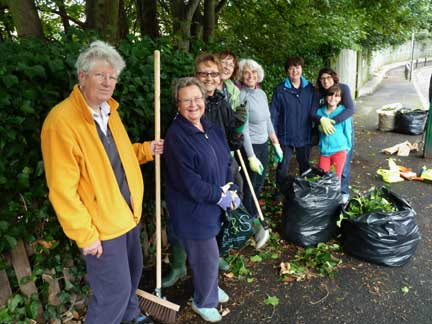 Over thirty Round Hill residents, representing all age ranges, were out on a morning (when the weather could not make up its mind) performing the maintenance tasks which have come to be associated with our community clean-ups. 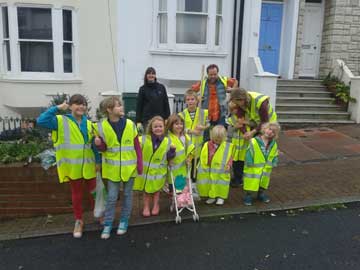 By midday, the Cats Creep was looking much more inviting. 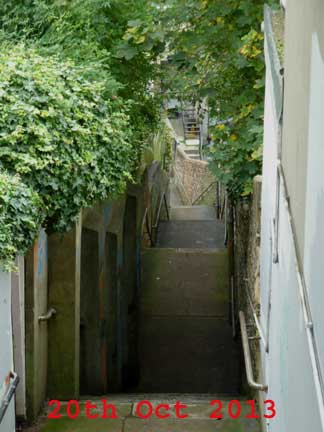 Similar effort went into taming the vegetation to the NE of Richmond Road so that the pavement was more navigable. 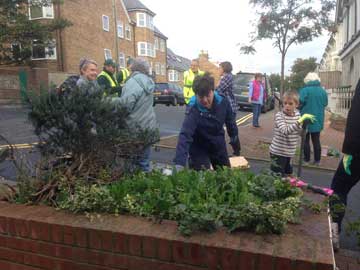 The gap between the ends-of-terraces of Mayo Rd and Princes Rd also got thorough attention. 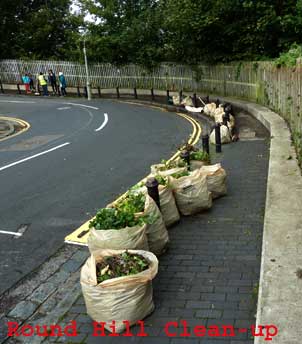 Damien's team from City Clean again supported this voluntary effort by providing yellow jackets and the transport needed to remove the clippings and other waste such as a roll of carpeting left out on the street. 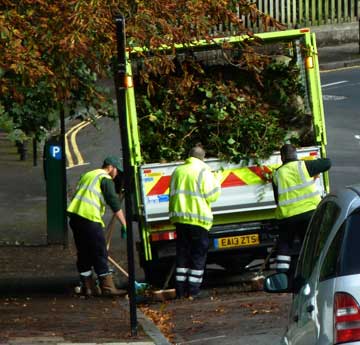 Bulbs were also planted to add a bit of colour to the neighbourhood's few public open spaces.

Brighton and Hove Council's City Clean department has liaised with The Round Hill Society too in the production of a range of stickers in different colours. We hope that residents will display at least one sticker on a front window in support of our community aim of reporting fly-tipping & graffiti, keeping footways both clean and accessible and generally ensuring that our local surroundings remain pleasant. 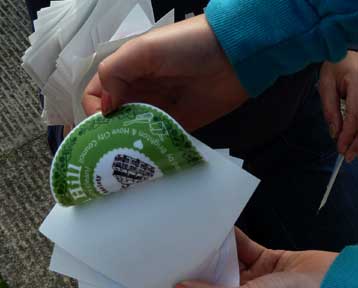 Most residents who have participated in our clean-ups (to date) have found them fun. One only needs to have short exchanges with others in our neighbourhood to renew the feeling of community which gets lost when residents have no time for their immediate surroundings. I found myself asking a local musician if he was available to provide instrumental accompaniment at our festive singing this coming December. No doubt there were similar exchanges among the 30+ residents who attended the event. This is how the work of a local residents' association is driven forward and how community spirit gains momentum. I hope we'll be able to provide a variety of events, yet at the same time I am convinced that these clean-ups are worth repeating. 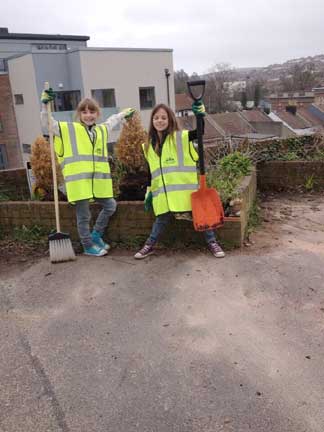 Following the success of our Round Hill Autumn Clean up in October 2012, we held a similar event Round Hill Spring Clean on Saturday 13th April 2013. Boo, Cath & Annie again played a significant role in arrangements (e.g. contacting City Clean, publicity) and making sure that everything went to plan on the day.

About 35 local residents (children from 5 years to older citizens including one of over 70 years) assisted in tidying up hedges, beds and borders.

We asked residents to (i) Spruce up ‘fronts’ (ii) Tidy bins and boxes (iii) Weed and trim foliage.

Three quarters of a ton of waste was taken away in City Clean vehicles. Volunteers got to work on plantings raised beds both in Mayo Court and in front of Richmond House at the corner of Richmond Road & D’Aubigny Road.

Richmond House The gaps between the ends of our period terraces (mid Victorian in Richmond Rd and D'Aubigny Rd and a mix of Victorian and mid 1920s in Mayo Road and Princes Rd) provide long views into and out of Round Hill. These connect a conservation area (which remains very much as it was originally planned) with Downland hillsides (Moulsecoomb, Bevendean, top of Bear Rd, Woodvale, Tenantry Down, Race Course).

If we can demonstrate that we value these gaps, developers will find it harder to plug them with ugly buildings (e.g. located on the Centenary Industrial Estate). It is common for pictures of trashed locations to be included in planning applications to justify the erection of ugly buildings.

The project in the vicinity of Richmond House was to make the corner plot more attractive. 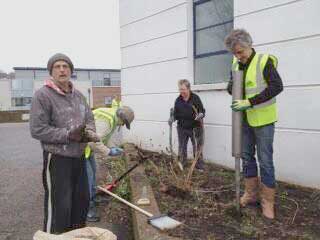 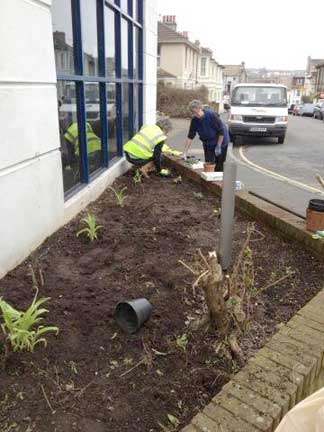 Our autumn 2012 clean up
See Argus Report on Round Hill community clean-up [October 2012].
A number of Round Hill residents offered their time to make a significant difference to the appearance of our Conservation Area, joined by very helpful staff from Brighton and Hove City Council's City Clean and two of our ward Councillors.

This initiative was a response to feedback from The Round Hill Society's recent Brighton University sponsored survey which indicated that badly put out refuse, dumping of rubbish on the streets, incorrectly used recycling boxes, dog mess, weeds and graffiti/tagging on our streets, spoilt residents' enjoyment of living in Round Hill. The success of the weekend has resulted in eagerness to repeat the initiative every autumn and perhaps in the spring too. Participants found it good fun as well as an opportunity to get to know more of their neighbours. 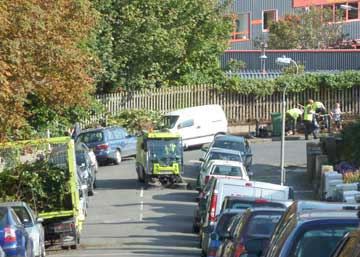 It was noticeable that a number of other Round Hill residents were getting to work on sprucing up their own properties & front gardens. 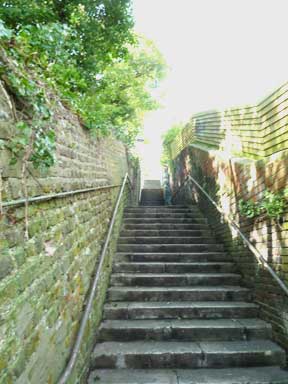 Although we still need to persuade those who use other people's walls as the display areas for their graffiti that there are more considerate ways of channelling their artistic talents, the clean-up of the Cat Creep has made this cut-through more agreable. We are grateful to all who have made a difference to Round Hill streets as well as to this useful passageway which we would like to remain unthreatening to all who can manage the gradient and the number of steps.

The Round Hill Society is always interested in ideas as to ways we can involve younger people in improving our neighbourhood as well as keeping public access routes welcoming and accessible to all. 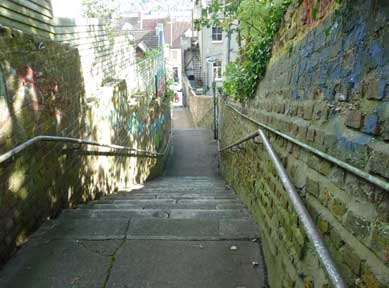 The RHS Committee would like to express our appreciation to Damien and his crews from Brighton & Hove's City Clean for the help they provided. This included the loan of yellow jackets & tools/equipment as well as help with painting over graffiti/tags; arranging to cut back shrubs that overhang pavements; removing rubbish from agreed points; regular collections of bagged rubbish throughout the weekend.

One of the pleasures of participating was working together with staff employed by the Council as well as ward Councillors, who devote free time to several other neighbourhoods (e.g. Triangle / Ditchling Rise & Area / North Laine) as well as Round Hill. Both Cllr Ian Davey and Cllr Pete West (& members of their families) joined Saturday clear-up shifts.

Working together with our local representatives as well as providers of public services breaks down the feelings of "us" and "them" which sometimes occur when there is poor communication between "the public" and those traditionally described as "public servants".

It was good also to see all age groups taking part from young children to residents who have retired from paid work. 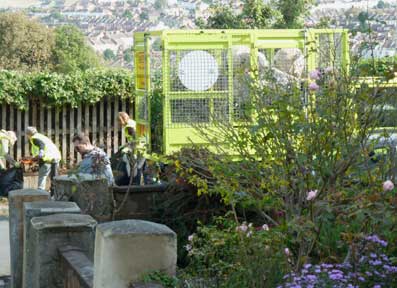 The occasion was both fun for participants and provided an opportunity to get to know a good cross section of neighbours.

A special "thank you" is due to Annie McCabe (Chair of The RHS) for her major role in organising the event, and to Boo Vaughan (RHS Committee Member) for her role in both guiding the clean-up and arranging for the event to be documented on video. 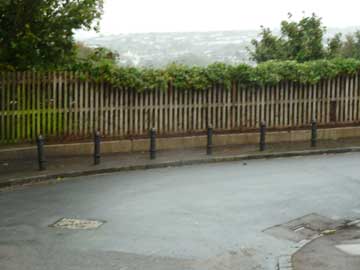 The success of the initiative means that the RHS Committee Members are motivated to repeat the community clean-up, perhaps in Spring as well as every Autumn. 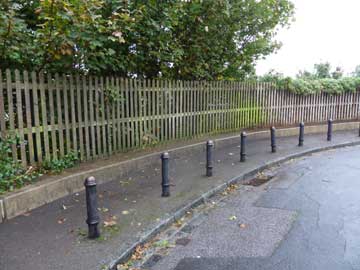 There may be interest too in establishing a gardening group to help those who find their gardens a bit much to keep under control. 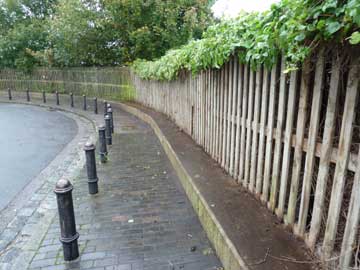 If you would like to be part of either project, please let Annie McCabe or another RHS Committee member know.

Awareness-raising can also help our community, especially in reltion to:

• manage household refuse to reduce the amount put out and lower the risk of seeing it spread along the streets by gulls and other wildlife.

There is also sometimes a need to inform those who are new to managing households on how to get rid of larger unwanted items responsibly.
This page was last updated by Ted on 03-Jul-2020
(Registered users | Amend this page)