Following a successful event in 2005, Open Gardens was repeated in 2006 giving the residents of Round Hill the chance to see some of the best gardens in our neighbourhood at the beginning of June.

Ten gardens were opened and once again the range and quality of the horticultural skills of our community was quite breathtaking!

This year, gardens were opened for slightly longer to give visitors more chance to get round all of the sites and appreciate the variety and ingenuity of Round Hill's gardeners.

Those who took advantage of the day had the chance to visit the 'secret garden' behind Wakefield Road and see how residents in Princes Crescent had dealt beautifully with their steeply sloping plot.

The secluded Belton Close garden was shown to great effect and included an opportunity for that all important cake-stop!

Elsewhere, visitors could enjoy live harp music, old post boxes, beehive compost bins, exhibitions on various topics including the local history of the area and spectacular views from different sides of the hill.

Food and refreshments were available at the Victoria for garden visitors, many of whom had exhausted themselves in the hunt for the secret hidden spoon in each garden!

The Round Hill Society Committee would like to extend their appreciation both to all those who opened their gardens on Sunday 4th June 2006 and to residents who supported the event. Since the event is now in its second year and six of the ten gardens also participated last year, it was interesting to measure the progress that has been made. This summary merely includes one photo for each of the participating gardens (in the order listed on the front page of The Round Hill Reporter). The photo gallery contains some good stills. The shots below are of lower quality since they have been grabbed from camcorder video, which has now been edited and made into a 28-minute DVD. 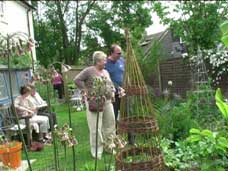 The owners of Garden 1 (above) prepared background notes on the history of the area and the planting they have done: a lot of hard work, which has evidently transformed the plot in a short space of time. 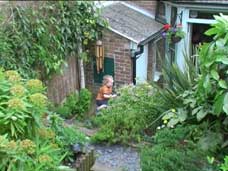 Garden 2, which participated last year, shows what can be done on a relatively small steeply sloping plot. The highest point contains a platform with outdoor furniture: a place for quiet relaxation, overseeing the stepped levels of the well tended garden descending towards the house. 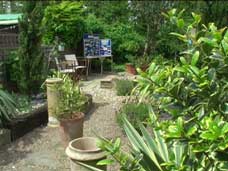 Garden 3 had its own resident harpist as well as an interesting display publicizing the work of Ukufundela Ubomi UK, which delivers HIV/AIDS awareness programmes to improve services for some of the most vulnerable people in South Africa. One of last year's open gardens also used the event to publicize a Volunteer programme. It is good to see Voltaire's philosophy of "il faut cultiver notre jardin" supplemented by a (Christian) attempt to help people in Africa to find practical solutions to problems such as AIDS. 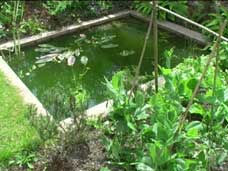 Garden 4 also took part last year, and it was clear through the amount of colour on display that much progress had been made in spite of the shortage of rain. The pond showed significant development. 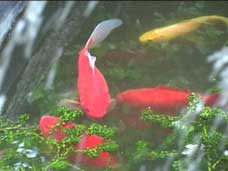 Garden 5 was one of three lovely gardens on the "green ribbon" threatened by what is known locally as the Cats Creep development proposal. The owner used the opportunity to publicize the Cats Creep Campaign and to remind local residents that the Council's formal deadline for letters of comment is 9th June. The attention to detail in this garden could not help but grow on anybody walking round this well looked after plot. The fish were among several captivating features. 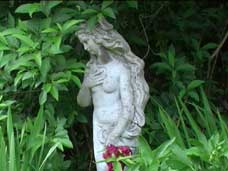 Garden 6, taking part for the second year, also featured very well stocked fish ponds. Visitors were treated to a display of black and white photographs showing Round Hill as it was in the early 20th century. The owners of this garden helped put together the local history book "From Rose Hill To Round Hill". 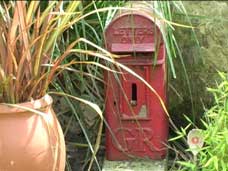 Garden 7, also participating for two years running, slopes downwards in a subtle curve, offering fine views of the buildings in the vicinity of Lewes Road and the hillside beyond. Seen from this vantage point, with the relative quiet of Round Hill replacing the congestion and bustle of the A27, all looks very attractive. I am always drawn to the Royal Mail post box in the corner of the garden, which adds a whole new meaning to the concept of "snail-mail". 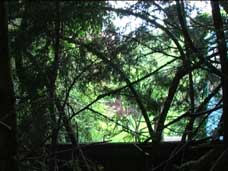 Garden 8, probably the best known in the area, really showed what could be made of Round Hill's most privileged "green ribbon". The owner was also lobbying against the development threat to the plot to the west of her garden (directly to the east of the Cats Creep steps). The photo looks west along this lovely green strip in the direction of the proposed development site. If the latter is granted permission, other plots on this strip will surely follow. Click HERE to see what other residents are saying about the development proposal. 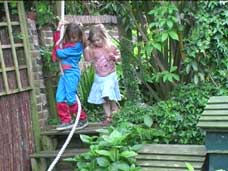 Both garden 8 and garden 9 (pictured above) also took part in June 2005. Garden 9 is a smaller plot of land, which is steeply sloping and very near to the former site of the Kemp Town branch line railway and the existing site of Sainsburys. Although attempts were made in designing the front of Sainsburys (on the Vogue Gyratory) to echo the archways of the former railway viaduct, the back of this supermarket cannot be described as attractive. The owner of garden 9 has therefore had to work hard on landscape features to screen her garden from brickwork which might otherwise dominate her plot. This garden has some eye-catching features of its own, and attention to detail draws visitors away from the outer surroundings, which are less privileged than those of the south-facing gardens in Richmond Road and Wakefield Road. 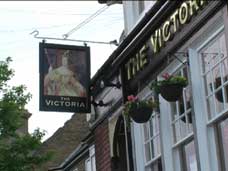 The last garden was one of several offering refreshments. The landlady of The Victoria took the trouble to lay on a barbecue (hot dogs and salad) at very moderate prices. The convivial atmosphere of the gardens was also to be found in the pub; several garden visitors used The Victoria as their last port of call.

The rain held off. The hard work in preparing for this event was done mainly by the gardeners (also by the organiser of the event: Terry Tidman, who would have again been one of them but for other commitments this year). Please let The Round Hill Society know if you enjoyed this event. The idea of "the wooden spoon" seemed to be a 'Hit' with the children; not one of them thought it was a booby prize! Please give us the benefit of any suggestions which could help in the planning of future events.
This page was last updated by Ted on 07-Jun-2021
(Registered users | Amend this page)