by Jan Curry from The Round Hill Reporter June 2007 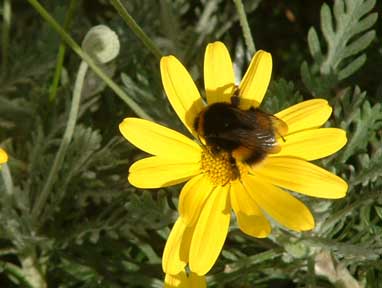 The gentle buzz of a bumble bee working its way across flowery borders is to me the sound of summer and brings me as much pleasure as collared doves cooing in the trees. To hear such drowsy tones amid the noise of the city really is a privilege.

Bumble Bees, unlike honey bees, produce only enough honey to feed their young. They are much bigger than the honey bee but are less aggressive. They will not attack [sting] unless they are molested - who molests bees? Unlike honey bees, they don't die if they use their stinger.

They buzz around from daybreak to twilight, visiting flower after flower and, if necessary, fly several hundred metres from their nest to do so. Bumbles keep warmer than most other bees due to their furry coats; this means they can begin pollinating flowers and blossoms much earlier than most other bees. This year I saw one on the winter flowering honeysuckle on a bright day in February.

They appear to visit pink and purple flowers the most but any fragrant flowers will do, although they don't seem struck on roses - too many petals to struggle through, I guess. Right now, in this garden, they're busy clambering into the foxgloves that are in flower three weeks early. I have planted sweet peas up the same canes as the runner beans this year in the hope that the bees will pollinate both sets of flowers at the same time and then I might get a good crop of both.

Bumble bees nest in holes, or under piles of logs or stones or beneath garden sheds. The young mated Queen bee will be the only one to hibernate in the Autumn, when the rest of her small colony dies. As with so many of our insects, bees are becoming more rare.

Think about it: the disappearance of pollinating bees on a grand scale and the immediate effect it would have on agriculture and plant life would be devastating. So be thankful some are still around - plant a flower or a bean, sit back with a gin and tonic and let the bees get on with saving the planet. 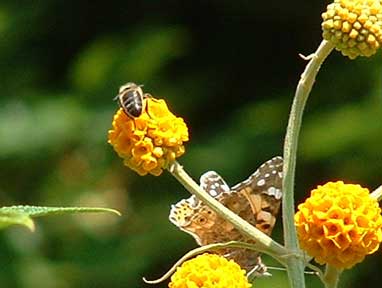