Round Hill residents have contributed to two local history books:

1. Rose Hill to Roundhill: a Brighton Community
compiled by Round Hill Local History Group and other contributors 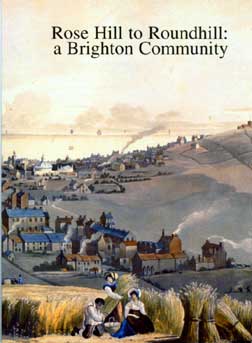 Having researched their area's past,  Round Hill History Group collaborated  with Brighton Books to publish their findings, producing a wide-ranging and rewarding study of the origins and development of an urban community.

The book is bound with a print of an early 19th Century view of Brighton from the Round Hill: we see the sweep of land from the Level down to the Steine, with familiar landmarks like St Nicholas' Church and the Royal Pavilion. The rolling chalk landscape of Sussex fills more of the view than do the buildings.

On the hillside itself, corn is being gathered and stacked; further down, washing is strung out to dry, while animals graze on the Level. In 1838 the Tower Mill topped the hill, about the same time as the first grand houses were being planned for the lower slopes of Round Hill.

By the end of the nineteenth century, the mill was encircled by houses; it survived with a little surrounding land until 1913. Soon the hill was completely built over; a few pockets of open land remained as nurseries until the 1950s. Even smaller green spaces are today being eyed hungrily by developers: much of the downland of which Round Hill was once part is now protected, increasing the pressure for urban infill, or 'town cramming' as those losing their open space will view it.

'Rose Hill to Roundhill' gives us an idea of how landscape shapes and is shaped by people: by the 1830s, laundries proliferated on a hill 'open to every breath of heaven'.

Market gardens helped feed Brighton's growing population, while industries such as Fisher Golf Ball and Cox's Pill Factories were built amongst them.

Launderettes and then domestic washing machines brought the demise of the laundries, and the orchards and market gardens gradually went to housing. The authors create a guide to a lost landscape: here a hidden orchard, there a drying ground now become a large and beautiful garden; elsewhere a hillside cottage lost amongst late-Victorian terraces.

A few errors have inevitably escaped the proof reader. Anyone looking for Cutress’s bakery shop next to the Tower Mill site will find it to be one door down from the top of Round Hill Road, rusty gated railings still just intact. The statistics for the huge vaccination operation against smallpox are given twice but differently.

For the period from the Great War through to the second half of the twentieth century, archive photos and especially oral histories give us a superb insight. Suspend the present and travel along streets both strange and familiar, discovering lost bakers, laundries and nurseries, a railway halt and windmill, an abattoir and a waste incinerator! Hopefully this book will lead people with knowledge or memories of the area to come back with their own stories to further illuminate this bit of Brighton. 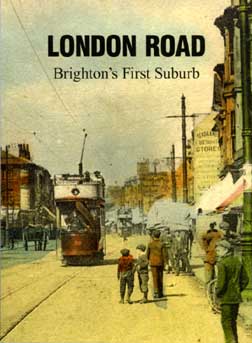