Monkey Business in Round Hill Road

from The Round Hill Reporter December 2011

When Bonnie Scovell, our Police Community Support Officer, attended our AGM in 2010 she mentioned that she was local, and attended the Downs School.

Later she told me that her Dad would ask her, as they passed the end of Roundhill Road, ‘Can you see the monkey?’

Bonnie said that she often saw it, in a cage on a platform above a garden. It was some time before she met someone who could confirm this childhood memory.

A long-term resident, who prefers to remain anonymous, recalled, ‘I first saw the chimpanzee in 1961 or 62, when I moved here. It sat hunched in its misery staring fixedly down Roundhill Road, completely without protection from the elements and with no sign of bedding of any kind. Its eyes reflected the hopelessness of its situation and they have haunted me to this day. 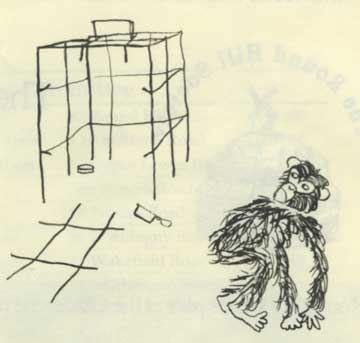 I have since heard that children would taunt it on their way home from school and it would return the missiles that landed in its cage. I have no idea of its fate - it just wasn't there one day. I still reproach myself for not reporting it to the authorities.’ Does anyone know any more?