Research findings for our history book

from The Round Hill Reporter August 2002

Research for the Society's book about the history of Round Hill continues - by Andrew Partington.

Those who came to the street party may have seen the history group's stand (conveniently sited right outside the New Vic) with a range of old photographs.

As a result the group will be making contact with several of you who came forward with memories and the offer of lending pictures for possible use in the book.

The group's thanks go to those who looked after the stand during the afternoon, and especially to Rosemary Fittock who researched and led the guided history walk which was one of the attractions of the day.

As our research goes on we are getting fascinating glimpses of life in Round Hill. We have heard about the bakery with ovens under the Lewes Road: when it rained the hot pavements steamed ...

When the tramrails were laid the old wooden tar- covered road blocks were used as firewood; the fire brigade were kept busy putting out the resulting chimney fires ...

When the branch line to Kemp Town was closed the old Lewes Road railway station became a pickle factory ...

And we have more information gleaned from the old documents and deeds in the society's possession.

For example, several people have told us about the old orchard that lay between the Cat's Creep and Upper Lewes Road.

We now know that this orchard was a single, right- angled, piece of land that was used as a market garden and nursery in Victorian times. We have a plan of the land sold at auction in 1901. 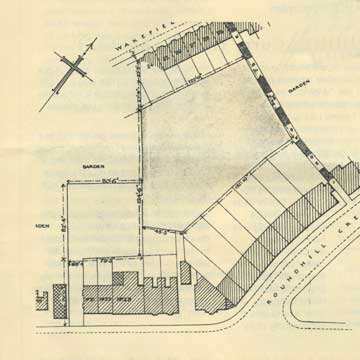 The auction leaflet refers to various glass frames, greenhouses and a chicken house included in the sale.

We think that the Upper Lewes Rd end of this land became the Verbana Nursery - but as yet we do not have proof of the link.