Compare with Roundhill Crescent in 1871

You will gather data on everybody living in Roundhill Crescent in 1891, including servants.

Another is Charles John CROSSLEY of 21 Roundhill Cres (born in Sussex).

Another is Joseph ALLFREY of 22 Roundhill Cres (born in Sussex) 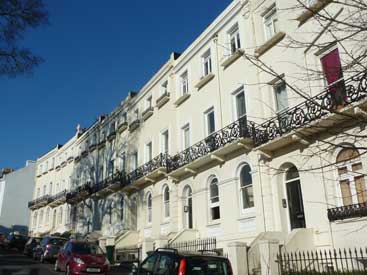 There are musicians at both ends of the terrace: 101 and 111

The 1891 Street Directory  Nos 1 to 40---Nos 42 to 109  complies with the census records in relation to missing numbers, though odd numbering only goes up to 109 while the census record shows a family at 111 who come from London.

The head, William Gordan GLANVILLE (aged 75) lives on private means. His wife Louisa Maria (also aged 75) was born in Lambeth, while their two daughters Fanny Louisa (aged 41) and Laura Gordon (aged 39) are born in St Johns Wood and Norwood respectively. Both remain single. Fanny is listed as a Visiting Governess and Laura as a Professor of Music.

The 1896 Pikes Street Directory shows that little has changed in relation to the absent houses. No changes on the south side, which has as many as 9 plots unbuilt on. On the north side, only numbers 39 and 41 are  now built and occupied. Interestingly, "Here is LENNOX ROAD" appears between properties 13 and 19: still no room for Nos 15 and 17.

However, the 1910 Pikes Street Directory
Nos 1 to 17 north--- Nos 19 to 123 north and 2 to 96a south
shows both numbers 15 and 17 as built and occupied. This directory also shows The Lewes Road Hospital for Women and Children, present at 101 Round Hill Crescent since 1905, but just about to move to Ditchling Road.

These plots could not be built on while Lennox Road, created in the 1860s, was in the way. However, planning permission sought in 1898 was granted in 1900 for conversion of Lennox Road into a passageway with steps since known as The Cats Creep. This made way for new houses on both Roundhill Crescent and Richmond Road. 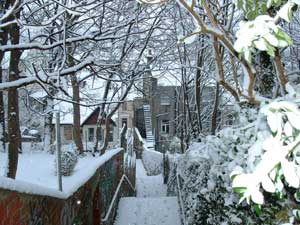 In addition to the following list, there are 39 people living from "Private means or income". These are frequently the heads of households. Many are of pensionable age. Few are recorded in the census as "pensioners", though the adjective "retired + occupation" is recorded in a number of cases. There is even a retired common traveller.

There are 23 "Domestic" or "General" Servants.

Note within the list that there are very few laundresses [as exist further up Round Hill where drying conditions are probably better and people are generally less well off]. A mere two households in Roundhill Crescent:

58 Roundhill Crescent offers two laundresses and one laundress's assistant. At No. 76, there is one laundress and one ironer. That's all. The population is generally older i.e. many of retirement age with adult sons and daughters living in the same households.

Roundhill Crescent contributes to the description of Brighton as "School Town". Below the comprehensive list is a section on this.

Schools and Teachers in Roundhill Crescent

In several cases, the teachers are the daughters of the heads of households and are aged in their twenties.

*** BOARD SCHOOLS
Wikipedia:The Elementary Education Act 1880 (the "Mundella Act") required school boards to enforce compulsory attendance from 5 to 10 years, and permitted them to set a standard which children were required to reach before they could be employed.

In 1891, 101 Roundhill Crescent on the junction with D'Aubigny Road, was called Streatham House and was occupied by a family who came from London. The head, Mr Henry Whelpdale (aged 72 and born in Grays Inn) was living on private means.

He and his wife, Mary Ann (aged 67 and born in Battersea) had four daughters, the three youngest of whom were born in Streatham! The only occupation given is for the second youngest daughter (aged 29), who works as a Teacher of Music.

In February 1905, a 7-year lease was acquired at £50 per annum at No.101 Roundhill Crescent (at the junction with D'Aubigny Road). This was for a pioneer enterprise, initially called the Lewes Road Hospital for Women and Children. It is described in Wikipedia as "the first hospital for the treatment of mental illness". As with Lady Chichester Hospital, it was closely associated with Doctor Helen Boyle who was a specialist in this field.

Rear of 101 Roundhill Crescent as viewed from D'Aubigny Road 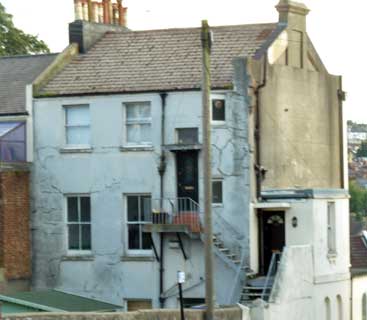 No 101 Roundhill Crescent also housed the dispensary which had been at 145 Islingword Road since 31st October 1899. It is hoped that the Round Hill building will shortly receive a blue plaque to go with Historic England's listing of No. 101.

Helen Boyle and her work in Brighton

The terminology used in census records in the latter part of the 19th century reveals social attitudes towards mental health: "Lunatic" - someone who is mentally ill, though at times lucid; "Imbecile" - usually applied to later life in cases of chronic dementia; "Idiot" - usually applied to mental deficiency from birth.