Sunnyside was once a prosperous brick built family home with panelled rooms indoors and a large glasshouse in the garden. 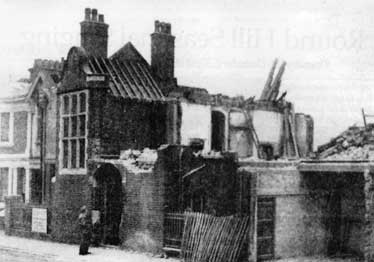 When the war came the owners moved away and the house was requisitioned. Bomb damage did for the glasshouses, and the Council used the house as emergency accommodation for homeless families immediately after the war. Up to 10 people per room were packed in, and soon Sunnyside became known as Heartbreak House. By 1955 it was empty and derelict.

This picture and information was taken from a 1957 edition of the Brighton Gazette, when the house was finally demolished to make way for – what? It might help you to know that the glasshouses had already been replaced by a block of flats when this picture was taken. The best clue is in the bay and roof detail of the house on the far left, which is still standing.