The history of the Open Market

by Ted Power from The Round Hill Reporter March 2006

The history of Brighton's Open Market can be traced back to the 1890s when itinerant traders known as 'barrow boys' used to pitch in Bond Street and Gardner Street. The police and Brighton Borough Council became tired of the nuisance caused to shopkeepers and eventually made Upper Gardner Street available on Saturday mornings for both barrows and market stalls. 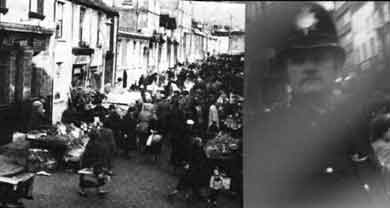 From the 1920s, a bowler-hatted gentlemen called Harry Cowley, born in 1890 and a chimney sweep by trade, kept order among the stall-holders. He was helped by vigilantes, recruited from among Brighton's unemployed.

Two campaigns were mounted - the first to force the Council to give fixed pitches to the stall-holders in Upper Gardner Street. The next was for sites for barrow boys in the part of Brighton now bounded by the London Road Shopping Centre and the Level.

Many of these barrow-boys were ex-servicemen who had fought in the First World War. Instead of a hero's welcome, they returned to a worsening situation of unemployment. They were forced to compete for pitches in Oxford Street (the stretch between Ditchling Rd and London Rd now used by buses).

In the early 1920s, Brighton Council attempted to move the barrow boys and ex-servicemen from their market pitches in Oxford Street. The traders did not want to go. The result was the battle of Oxford Street, which sealed Harry Cowley's reputation as leader of the barrow-boys. Harry mounted a rostrum, deliberately located in the middle of the tramlines in the London Road and addressed hundreds of supporters, who packed the road. Two tram-loads of police officers used their truncheons in an attempt to disperse the crowd, but Harry remained on the rostrum for long enough to get his message across to the Council.

Until 1926, the barrow boys and stall-holders were permitted to trade in the central rose-walk of the Level.

Afterwards, the Open Market moved to the cobbled frontages of the houses in Marshall's Row, allowing the vacated site to be developed (in 1927) into the existing children's playground. 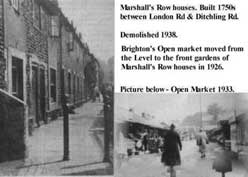 Harry Cowley's name still circulates in the area. The 'Cowley Café' in London Road is named after him as well as a Brighton & Hove double-decker bus.

The demolition of the houses on Marshall's Row in 1938 created more space for the market, but the traders had to wait until 7th January 1960 until the present permanent retail market with 42 stalls was opened by the Duke of Norfolk.

The Brighton's Open Market was temporarily located in Francis Street (and later in a corridor to the north of the development site) while its new home was being constructed.
Its survival contributes to the feel-good factor of living in a historical city, which is not just a clone of the corporate shopping space that has become all too familiar in the 21st century. In a world of large organisations and ferocious competition for market share, small traders need our regular support if the open market tradition is to continue in our city.