3. Street lamps correspondence
How many emails does it take to save a lamp?

What's up with our historic street lamps? 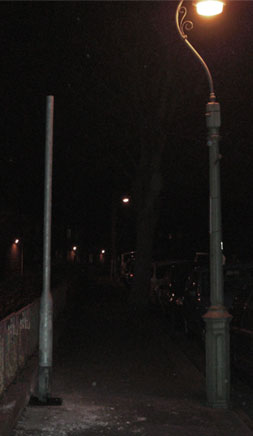 New street lamp posts have begun to appear at several locations throughout Round Hill.

On Monday 16 February, a new post was installed at the bottom of Belton Road. Princes Crescent saw a similar scene although in both cases, the bare metal posts were topless. At the junction of Mayo and Princes Roads, a post complete with bracket and lamp has been spotted.

Each new structure appeared next to an existing, functioning, cast iron lamp post and at first the activity was mystifying.
Any resident who has had reason to repair sections of their property facing the street will know that the restrictions in a conservation area are very difficult to meet. The replacement of sash windows for example has to be accomplished on a strictly "like-for-like" basis. This often means more work and additional expense for property owners but the benefit is that the historic streetscape is protected. The local authority should be bound by the same rules.

We have had to seek further assurances from the Council's Street Lighting Inspector, since a team from Colas was out on Sunday 1st March, fitting swan-necks onto the new galvanised steel posts and under the mistaken assumption that the cast iron columns were to be removed shortly. 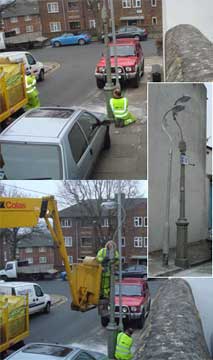 Don't let them go!
Roger Amerena, the Regency Society representative on the Council's Conservation Area Advisory Group, urges Round Hill residents to see that their traditional cast iron lamp posts are repaired and put back rather than removed and broken up for scrap.

He told Ted Power:
"They are like gold-dust! They were cast in the 1880s as columns for gas lamps by J. Every, the largest traditional iron and steel foundry ever to be based in Lewes, East Sussex.

The street lights were later powered by BLEECO,
the Brighton, Lancing and Eastbourne Electricity Company. 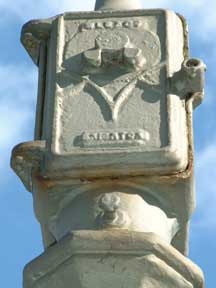 The current swan necks, also cast by J. Every of Lewes, were added in the 1930s.

The reason for moving lamp posts back from the kerbs, is to prevent vehicle damage, but make sure you don't lose them!"

Above (SE end of Princes Crescent)

When the cast iron posts were erected on the kerb, they were provided with a single ladder bar on the right hand side The door would usually be on the pavement side so as the lamp fitter climbed the ladder on the pavement side, he would hold the post with his left hand, leaving his right hand free to do any work.

Above (East side of Crescent Road) 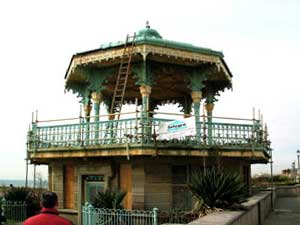 Although attribution is uncertain, the columns of Brighton's bandstand are thought to be cast (in 1884) by J. Every of Lewes, the same foundry responsible for casting Round Hill's traditional lamp posts.

Can you see any similarities in the designs?

Set up in 1832, the foundry which came to be known as the Phoenix Ironworks was located at the bottom of North Street in Lewes adjacent to the river Ouse. This site proved useful for delivery to the ironworks, for example nine cargoes of iron and steel (1,584 tons) were transported by river to J. Every at the Phoenix Works in 1936. The Phoenix Ironworks closed its doors for the last time in the late 1970s. In 2000, the area was subject to extensive flooding... 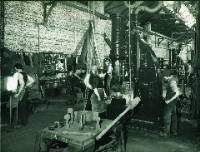