Playsafe Sessions give children the opportunities which adults of today had when roads in residential areas were less busy and dangerous. Safe play is made possible through a short-term road closure organised in cooperation with local residents and The Council's transport department.

Which street games were played in the past?

The website at www.mybrightonandhove.org.uk has several comments written by former Round Hill residents about their childhoods. There is some reference to play, though there could be more.

Not all games are suitable for tightly packed streets, but there are some which may remain popular or could be adapted to tighter spaces.

Two well known types of games, which will always remain, are hopping and skipping.

Chalk markings in some city streets show that hopscotch is still played, though limited pavement space and hilly terrain mean that conditions for this game are less than ideal in Round Hill.

In some Brighton streets, a long rope was extended from one pavement of the street to the other, but please don't try this today unless the road is really closed!

With so many windows & parked cars around and so little open space, ball games will probably find limited favour among adults in Round Hill streets. However, we have seen hula hoops in evidence: e.g. during The Round Hill Society's June 2011 street party. 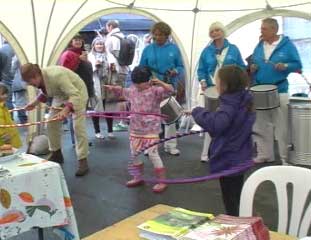 Outdoor tops are probably a thing of the past and there are more suitable places for kite-flying e.g. in Brighton's larger parks.

Many games, including skipping, used clapping, rhythm, verse & song, acting &/or story-telling as a background. Some games took the form of  initiation ceremonies; others were used to mark special events, dates or seasons.

Impersonation of adults took on different forms. There were courting games, usually set to song, associated with match-making and weddings (Every soap opera needs the occasional wedding). The theme of "good" versus "evil" was exploited through games such as cops & robbers, cowboys & indians and other role play games, some which may no longer be considered as politically correct.

Freedom both to copy and to invent

With play returning to our streets through playsafe sessions, scope also returns for memories and ideas. The Round Hill Society would welcome descriptions either by children or adults of games which may enrich these sessions. However,  freedom to invent ones own games should always remain an option. Having the open space to allow mixing between neighbours makes it possible for children both to continue good traditions and to invent future ones.

Well known books on play include The Lore & Language of Schoolchildren and The Singing Game both by Iona & Peter Opie (Oxford University Press).