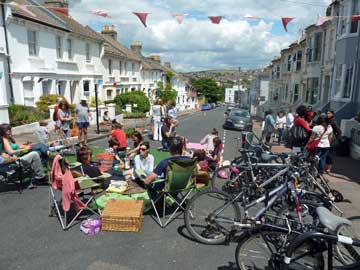 The afternoon was punctuated by three musical performances:

[2] the duo (comprising Elizabeth Ryder-Weldon and Michael Coates) known as Imaginary Friends, and

We are grateful to all these singers and musicians for offering time to their neighbourhood. 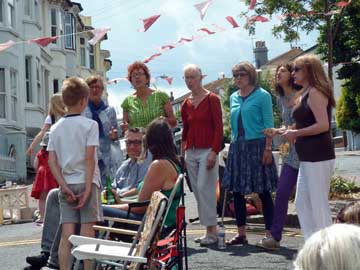 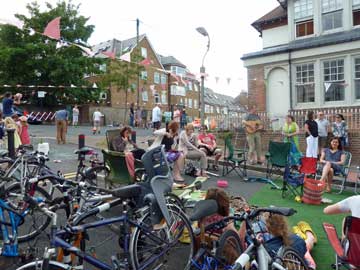 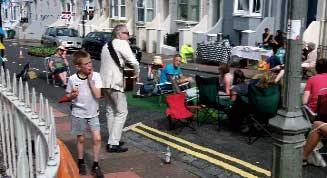 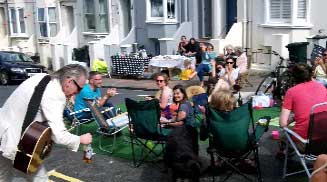 There was also a plant sale, a drinks & cake stall and a raffle. The raffle raised £93.70, which Carol (our treasurer) says was all down to the fantasic "free" cakes and the excellent choice of prizes. Further appreciation goes to the organisations and individuals who donated the prizes. The plant sale raised £34, selling nearly 100 plants (a few of these were given away at the end). 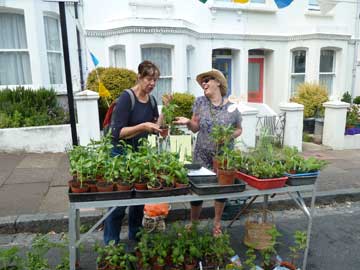 Added to this revenue, which will all go into the funds of The Round Hill Society, is £6 raised by children selling cherries from their grandfather's garden; they started by giving them away free, but a resident suggested to them that they could be entrepreneurs in the presence of adults who had few buying opportunities since so many nice cakes (including delicious fudge) were being shared. Within a few minutes that had raised nearly 20% of what had taken us the whole afternoon to raise at the plant stall and added it to The Round Hill Society's funds. 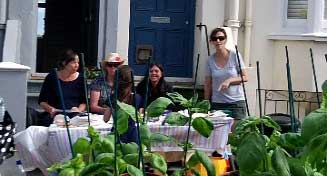 One of the most pleasing features of outdoor community events on our own doorsteps is the opportunity to meet both long-term and new neighbours and to learn a bit about them. We have fixed 1st October 2014 7pm to 9pm at Down Infants School as the provisional date and venue of our next Annual General Meeting which all local residents are encouraged to attend. If we don't follow up new acquaintances before then, it would be good to see new as well as old faces at the October meeting. Part of its purpose is to elect the Round Hill Society's new committee for the ongoing year. 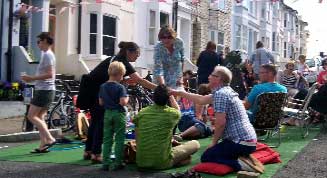 PlaySafe gives similar opportunities for children who are in the process of learning social skills having perfected the art of balancing on scooters or other wheeled objects. The steep incline of many of Round Hill's streets does not favour safe play when roads are open to motor vehicles, but when Mayo Road (one of our less hilly streets) is closed to normal traffic, then it presents a relatively safe play space. The Round Hill Society would like to thank residents in Mayo Road and the lower section of Richmond Road, several of whom participated in the picnic event, for their co-operation in allowing the road closures for these occasional play sessions. 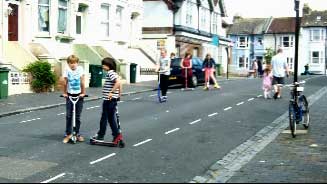 We would also like to thank Brighton and Hove City Council for assisting in this, and also for making it possible for The Round Hill Society to install the new planters at each end of Round Hill Crescent. Our chair, Annie, obtained the plants and organised a small group of local residents to assist with the planting. 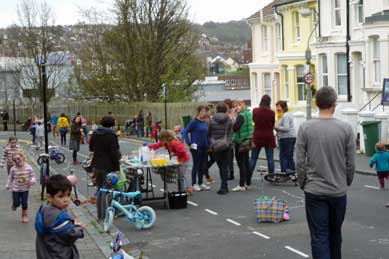 The Round Hill Society would also like to thank Brighton and Hove City Council’s Transport Department, which cooperated in the two-hour road closure and producing high vis signs to warn motorists and keep the event safe. A big 'thank you' as well to Damian and the crew from City Clean for clearing the street.