its use to support a Neighbourhood Watch

This page seeks to identify the crimes in Round Hill which affect residents most. It also looks at the purposes of the Sussex Police and Crime Commissioner's Safer in Sussex Community Fund (SiSCF) and its possible use to support a Neighbourhood Watch in Round Hill.

The official Neighbourhood and Home Watch Network at https://www.ourwatch.org.uk/ will identify local examples of Neighbourhood Watches when we enter Round Hill postcodes into the search box. Try it.

Note that Florence Road, Southdown Avenue, and Aberdeen Road / Edinburgh Road / Inverness Road have existing Neighbourhood Watch schemes (but verified by a volunteer rather than the police). We could ask / learn how they are run. 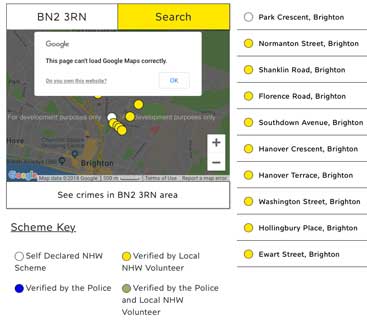 Thank you, Round Hill residents, for sharing concerns to include in a project / bid for funding to address community safety.

1. Community safety concerns of which we are aware

Note that residents in the above neighbourhoods have joined together to form a Neighbourhood Watch and are making use of finance they have obtained from The Sussex Police and Crime Commissioner's Community Safety Fund. Their projects include
[i] erecting street signs to announce the NW's presence,
[ii] tackling the problem of speeding vehicles,
[iii] discouraging cold calling, and
[iv] holding meetings to raise awareness of crimes (e.g. scams which might deceive people who are not informed about them).
[v] Junior Neighbourhood Watch. See Eastbourne example
Perhaps the Downs Junior school could undertake a similar project.

1. Concerns of which we are aware

Following initial discussion at Round Hill Society meetings, and some research into what has worked in other urban areas, we are proposing to look at the feasibility of introducing a rejuvenated and amplified Neighbourhood Watch Scheme, a 21st century version, possibly in conjunction with a bid for funding for Community Safety initiatives from the Police & Crime Commissioner. Through such an initiative we would aim to strengthen our relationship with local police officers and develop a mutually supportive relationship. In the end we want to support each other and make our community as safe as possible.

Some of the concerns mentioned by Round Hill residents are also addressed by members of the Neighbourhood Watch network:

See their Frequently Asked Questions and their table below:

Another good knowledge base is what Local Authorities are doing to address residents' concerns. Brighton and Hove City Council responds to many requests and complaints - thus contributing to community safety.

Brighton and Hove City Council has a web page on Street lighting with a link to Report a Faulty Street Light. Interestingly,  our Council has been involved in a major New Street Lighting project. They are attempting to replace more than 18,000 lighting points, providing new energy efficient LED lighting in several parts of the city.

Local resident Dom Furlong writes: "I've spoken with the Acting Manager of the Street Lighting Team at the Council, Dan McParland. The Cats' Creep steps have four lights on them: one at the top, one at the bottom, and two on the actual steps. Dan's agreed to escalate the change over of the three orange lights on the Cats' Creep to white LED lights -- the fourth light's already been done. He said they couldn't add any more lights due to the private gardens on either side of the steps. This should slightly improve the lighting there but the LED lights are more spot-focused and not as diffused as the old-style orange lights. There is also the issue that if people are better able to see on the Cats' Creep, this may encourage drug-taking there. On balance, however, I think the white LED street lights should be an improvement and make people feel safer."

Note that Brighton and Hove City Council shows willingness to address concerns on an individual basis and provides the contact details [Tel: 01273292517 or Email: streetlighting@brighton-hove.gov.uk ] of its street lighting department.

One such concern is whether the appearance of the structures associated with the new LED lighting will be in keeping with the character and appearance of our conservation area? How well will the new designs blend in with our historic cast iron street light columns. See Brighton and Hove City’s Council web pages: Local List of Heritage Assets and illustrated PDF on our historic street lights.

Each scheme has a coordinator who acts as the key contact point for the scheme. They liaise with the police (e.g. members of the Brighton Neighbourhood Policing Team), scheme members and the general public – for instance, people who are interested in joining the scheme – as well as non-member residents when necessary. A scheme may have more than one coordinator as long as members and police know who the key contacts are. The coordinator ensures a smooth flow of information and communication between the police and scheme members.

However, the office of the Sussex Police & Crime Commissioner's Safer in Sussex Community Fund (SiSCF) does invite bids for awards of up to £5,000 from  local organisations and projects which serve the purposes of reducing crime &/or improving community safety. The next round for bids is in early 2022.

Click on graphic for information on
the Safer in Sussex Community Fund. 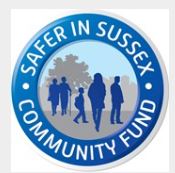 6. Kinds of projects which receive awards