by Jackie Jones from The Round Hill Reporter June 2007

Many large structures such as Stonehenge and the Great Pyramid at Giza were built to demonstrate the passing of the seasons by marking the solstices and equinoxes and therefore the changing length of daylight. With increased civilization, an instrument for dividing the day into identifiable intervals was created. The earliest known sundial dates from Egypt in 1500BC and divides the daylight hours into equal periods. As our need to accurately mark the passing of the day increased along with knowledge of the solar system, so sundials became more complex.

But before you rush off to the garden centre to buy one, there are a few points to look out for. The majority of mass-produced dials available cheaply (and not always that cheap) will not work in this country - or anywhere else.

There are many types of sundial but a simple, horizontal garden one should be made for the latitude where it is to be used. The gnomon (from Greek "one who knows"), which is the piece that casts the shadow, should be perpendicular to the dial plate and be set up to point true north (not magnetic north). The angle its edge (which should be straight) makes with the noon line should be the angle of latitude. In Brighton this is nearly 51°. The gnomon root should be on the 6-6 line. Remember that it will read one hour behind your watch as we are on summer time at the moment. 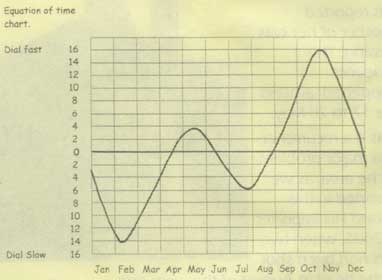 Due to the Earth's elliptical orbit, days are not the same length throughout the year (yes, really, you don't imagine it) some days can be up to 16 minutes longer or shorter than others. To relate the time your dial reads to mean time, which your clock will show, you will need an equation of time chart [as shown). You could, of course, make your own dial; it's not difficult with basic wood or metal skills.

The details of where to put the numbers are available in books or websites. A good place to start is the British Sundial Society.
This page was last updated by Ted on 10-Nov-2013
(Registered users | Amend this page)