by Jan Curry from The Round Hill Reporter March 2008

I was sorry when I heard a group of school children had visited the Royal Pavilion Garden to take part in the Annual Garden Bird Watch Event and didn't see a single sparrow. Not really surprising though, as we are told that the House Sparrow is a Red List (in danger) species, owing to a serious decline (over 60% of its population in the last twenty to twenty five years.) Sparrow numbers have certainly crashed .

Trouble is they need insects to feed their young and it is obvious insects are relatively scarce too, (judging by the fact that when we bought our first car, we had to wipe away a gloopy mess of insects from the windscreen wipers, after every journey, something we never have to do now.) Urban insects and birds that feed on them are rapidly being reduced due in part to gardens and small pockets of derelict land being grabbed for development.

Older sparrows eat seeds and seeds are also less plentiful in both town and countryside. Farmers are very efficient, weeds do not flourish and arable seeds are not scattered around when they are harvested. Competition is fierce and Ring Doves a species on the up, eat an almost identical menu to the smaller sparrow. Strangely, blue tits and chaffinches also seed eaters when mature, are showing a slow but steady rise, whist sparrow numbers still diminish.

Happy, then am I that a chirpy, cheepy colony of sparrows live in the back gardens of Richmond Road…

…Enter the Sparrowhawk (they eat many varieties of small birds not just sparrows) I see her on odd occasions zooming along the top of hedges, blink and she is out of sight - or I hear a doomed squeal of a bird caught unawares feeding or even in mid flight. Death must be mercifully quick. 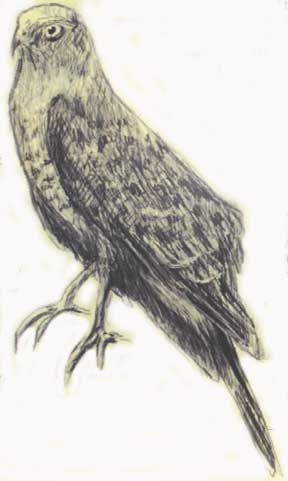 Last week though, she perched on our Mulberry tree and stayed for ten minutes at least. She was magnificent - huge orange gold glaring eyes, framed by white eye brows and a neck that seemed to swivel almost full circle, grey brown bars across her chest and wicked looking talons.

The garden had fallen completely silent, it was very eerie. Then she was gone and almost immediately the twittering commenced.

I, along with my neighbours feed the birds, the local bird population including sparrows appear to be thriving - hence the Sparrowhawk. Lets face it, if there were no sparrows or song birds here, there would certainly be no sparrowhawks. So we must be doing something right.
This page was last updated by Ted on 10-Nov-2013
(Registered users | Amend this page)