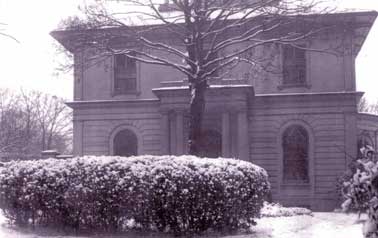 A winter's scene in old Round Hill (or to be precise Rose Hill Park)
This photograph was taken in the winter of 1907 and is of a view of one of the four large houses that stood on what is now the Sylvan Hall Estate. This house was originally called Rose Hill Villa, and was built in the 1840s as part of a development that was to be called Rose Hill Park. This park was bordered by Ditchling Road, Upper Lewes Road, Wakefield Road and most of the south side of Princes Crescent, covering a triangular area. The area north of what is now Bromley Road and round into Princes Crescent was due to be developed as The Round Hill Park, with large semi detached villa residences, still in existence in Ditchling Road and on part of the north side of Richmond Road. The other three houses of Rose Hill Park were the Sylvan Lodge (later Sylvan Hall) located at the end of Canterbury Drive on a site now occupied by flats called The Pines, and Wakefield Villa, located at the end of Bromley Road in the apex of land at the junction of Wakefield Road and Princes Crescent.

Rose Hill Park was developed by the Colbatch and the Clarke families, two families that were later to intermarry and become the Colbatch-Clarkes. The families were staunch supporters of the Church of England and at least two of the houses were leased out to retired clergy. In 1924 the extensive grounds of the estate were used for a pageant to celebrate 50 years of St Bartholomew's Church. By the 1900's, Rose Hill Villa was renamed Hill Lodge and used as Halls of Residence by women students of The C of E Diocesan Teachers Training College opposite the house on the corner of Ditchling Road and Viaduct Road. The Cottage remained as the family home until 1948, whilst Sylvan Lodge was taken over by the students in 1923 and renamed Sylvan Hall. Wakefield Villa was renamed Woodfield Lodge at some stage and was officially taken over by the students in 1931 becoming known as The Rookery, however a card dated November 1914 from a student called Dorothy to her friend June mentions that here residence at 48 Ditchling Road did not compare with that of The Rookery, so it seems that the use of that house for the trainee teachers may have predated its full transfer to student accommodation.

The winter photograph of Rose Hill Villa (Hill Lodge) was in use as a postcard and was sent to A. Warner of Streatham in Nomvember 1908 from Elsie, saying "This is a picture of our lodge taken last winter. My room is on the left hand side at the back." In the photo, the entrance faces Ditchling Road with the large bay window facing south towards what is now Fir Bank and Hazel Bank flats, with Bromley Road on the left. The whole of the estate was purchased by Brighton Corporation in 1945/46 and the flats that now exist, originally designed for a private development, were gradually built in the period 1948-51 and Sylvan Hall, after being converted to 9 council flats in 1948 was demolished in the late 1970's. The Training College ceased to be used by The Chichester Diocese just before 1939, and was requisitioned for war use by The Royal Engineers pay unit, transferring to its current use in the 1990's.