Roundhill Crescent History from a house

When I came to live in Brighton in 2001 I joined the Round Hill Society, which was, at the time, researching the Round Hill area as material for a book which became ‘Rose Hill to Round Hill – a Brighton Community’.

The Upper Lewes Road was one objective, and I became fascinated by the names of the people who had lived there. When the project was completed I decided to research the house in Round Hill Crescent in which I had just bought a flat.

Apparently it was first owned by a Henry Baker Colbran, a coal merchant and builder from Kemp Town. He was born in 1799 or 1800, and it appears that he moved to Round Hill to find work on the new railway being built in the Round Hill area in the 1840s and 1850s. By 1851 he was married to his first wife, Jane.

They had three servants at home and Henry was employing eight men in his businesses. By the time of the 1856 census he was an estate agent, and by 1859 a surveyor as well. His address was 4 Round Hill Crescent at that time, but the numbering changed as more houses were built, so the same house is now number three.

The 1861 census tells us that he had a new wife, Diana, and three sons – Henry, John and Thomas. A fourth, Philip, was born in 1862. By then he was Surveyor to the Conservative Land Society – a move up in the world?

He bought Lot 2 in the Upper Lewes Road from the Reverend T Martyn and Lot 1 from J C Webb. These lots were originally called 1 and 2 Round Hill Crescent, and included the gardens. How deeply he was involved as surveyor for other houses in Round Hill Crescent it has not been possible to find out, even with the assistance of Roger Barker.

I would be fascinated to know if anyone knows more of the Colbran family (Colbran with an a, not an o), as he sounds such an interesting man who started his working life as a coal merchant and ended his days owning 3 Round Hill Crescent, 24 and 25 Upper Lewes Road and £20 15s 8d.

The map section below is from the 1875 Ordnance Survey and shows 24 and 25 Upper Lewes Road just west of the junction with Round Hill Crescent. Note that the Cat Creep is labelled Lennox Road. Only later was it found to be too steep and converted to steps. 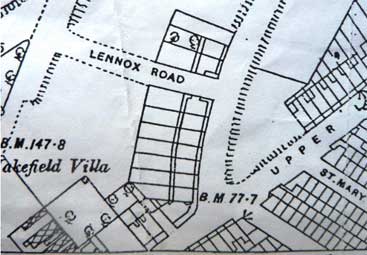