1. Street Lamps why keep the historic ones?

How many emails does it take to save a lamp?

I am writing to you as secretary of the Round Hill Society, following a recent committee meeting decision to raise this matter with you.

A few weeks ago a cast iron lamppost was removed from the middle of Richmond Road (south side, close to No 60). Once the guys had it down they cut it in two with a big angle grinder tool and loaded it onto their truck. Nothing has appeared in its place, but several householders nearby have become concerned that they will not get as good a replacement as they have lost.

You may recall a similar saga outside No 112 Richmond Road a few years ago. An old design post was removed and a poor steel one put in its place. Protest led to the re-installation of the original, with the addition of a property-line low-level boxed switch to overcome the perceived hazard of a lamppost with switch fitted at a high level (just below the swan neck).

This is a Conservation Area, and we would expect the Highway furniture to be treated as you expect us to treat out homes.

Please can you act to ensure that the original post is returned, after necessary welding if required.

Many thanks for your e-mail concerning the street lighting in the Round Hill.

This matter was brought to our attention through the Round Hill Society and a resolve is already in progress, these columns were erected in error by a member of the street lighting team who is inexperienced and unaware of the conditions surrounding conservation areas, these new columns will be removed and a better resolve will be sought, our intentions are to keep the original cast columns where possible, however as you may be aware there are circumstances that this is not possible, should this be the case a replica cast column will be used.

The new columns will be removed as soon as possible to make it clear that they were installed in error, however I have to allow up to 3 working weeks contractually for our contractors to carry out this works.

From: Peter Meakins
To: Jody Easkiovitch
Sent: Wed Aug 05 21:22:46 2009
Subject: Re: Street Lighting
Dear Ms Easkiovitch,
Thank you for you reply. Please could you let me know if the faulty streetlights discussed will be repaired sometime soon, as it has been getting on for a year since some of them stopped working
Many thanks
Peter Meakins (and on behalf of the Round Hill Society)

Many thanks for your e-mail regarding the lighting in Round Hill as you are aware we are having to explore various options in order to keep the original columns in place, this is something that is still ongoing and as such there are no definite proposals as yet, we are currently in negotiations with a cast column manufacturer with a possible resolve being developed

Dear Ms Easkiovitch,
The street lights discussed in Roundhill Road and Belton Road (junction with Prince's Crescent) are still not working. I believe they have not worked for about 15 months
This seems an extraordinary length of time. Any news?

Unfortunately some months back we did go forward with installing replacements for some of the non functioning lights, however the residents association became very active in insisting those columns were not removed but repaired, as such we have had to pass this to our conservation team for guidance on what we can do, currently there has been no information from them and as such we have been seeking out possible ways of repairing these columns to allow them to stay in place while adhering to current electrical regulations, this matter has been going on for some months with no resolve being found, should this situation change I will endeavour to keep you updated

Thanks for your reply.
Please could you explain what the problem is with the two lamps discussed? In the past kerbside junction boxes have been installed to service lamps which have no integral box at ground level. My understanding was that the Council also has a stock of victorian lampposts for use as replacements. One was installed to replace a lamp in Richmond Road a couple of years ago - as happened earlier this year it had been taken out after developing a fault and wrongly replaced with a modern one. I am surprised that your conservation team have not replied to your query - there are many conservation areas in Brighton in which original features such as lampposts are maintained.
Hopefully this is not an insoluble problem, as it is not pleasant having to walk around in the dark.
Kind regards
Peter Meakins

Dear Mr Meakins
When we originally tried to change the columns this question was raised, Brighton & Hove City Council were prepared to change them for cast columns that we had in stock, these columns were slightly different in design but were still a replica of Victorian columns as were used else where in the city, when we approached the residents association this was deemed unacceptable as they were not the same as the columns in place and the swan neck brackets on top would have to be changed which again caused some upset, it was for this reason that we referred this to our conservation team to see if they could offer a suitable solution, the original columns that are in place are the old gas columns that do not have an access at the base of the column, in order to comply with the latest regulations the column must be fused at ground level and not at the top of column as they are at the moment, all the columns that are fused at the top of the column do not fall foul of this regulation as we do not have to carry out any tests as parts are still functioning, unfortunately the small amount that have had failures are subject to electrical tests which must be recorded by our contractors, these tests determine the course of action and on these occasions it means that the columns must be replaced, leaving us in this position.
I have referred this to my managers as well in the hope a resolve can be found but unfortunately at this current time I am awaiting guidance as to the best possible solution.
Regards
Jody Easkiovitch
Street Lighting Inspector
Brighton & Hove City Council

From: Peter Meakins
Sent: 26 November 2009 18:32
To: Jody Easkiovitch
Subject: RE: Street Lighting
Dear Mr Easkiovitch,
I appreciate the difficulty in maintaining old equipment and complying with modern electrical safety regulations.
Is the only problem with the existing columns the lack of a ground-level jointing / fuse box? I ask because as mentioned in my previous e-mail, several identical lampposts in the area have had a small jointing cabinet installed on the pavement beside them, which apparently overcomes the difficulty caused by recent safety regs.
Are there other faults with these lamps you have not mentioned which prevent this from being done?
Regards,
Peter Meakins

From: Jody Easkiovitch
Subject: RE: Street Lighting
To: "Peter Meakins"
Date: Monday, 30 November, 2009, 11:22
Dear Mr Meakins
Many thanks for your reply regarding the non functioning street lights
When this problem first arose it was as a result of a former member of the street lighting team making an error and not realising this was a conservation area, the only way we could rectify this was to install a ground level feeder pillar to overcome the regulation issues, this was only done as a measure to correct a problem but was never to be a solution for all future problems, as our conservation team is not happy for this to be done with each post as it will result in an excessive amount of street furniture that is not needed, so again we are very limited to what we can do to resolve this.
Regards
Jody Easkiovitch
Street Lighting Inspector
Brighton & Hove City Council

Thank you for your reply.
If ground-level feeder pillars are all that are needed to get the lamps working again then I would have thought that it would be an excellent idea to install them as soon as possible.
The ones already installed are small and unobtrusive and I cannot imagine anyone objecting to a couple more on conservation grounds.
From what I can gather there does not seem to be any other plan to bring the lights back into use.
The lack of lights in these streets is both inconvenient and dangerous. The lamp in Roundhill Road, for example, is the sole one in the street.
Please let me know what you think.

Dear Roger Dowty,
I draw your attention to a message from Jody Easkiovitch, street lighting inspector (attached), who says they cannot approve separate switch boxes for old lampposts, even though you have approved them in the past here on Round Hill.
Some of these lights have been out of commission for over a year now.
Please tell them to find and use a small switch unit at the back of the pavement so we can see our way about.
Rob Stephenson, Secretary, The Round Hill Society

Thank you for your email. I will look into this but it may take me a little while before replying.

I wondered if you might be able to help move things along so we can get these lights working please.

I enclose photos both before and after of a lamppost at the corner of Mayo and Richmond Roads, here on Round Hill. 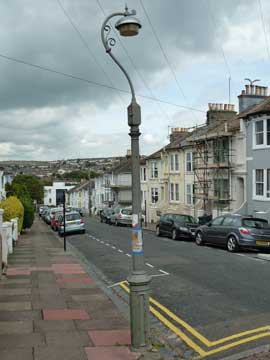 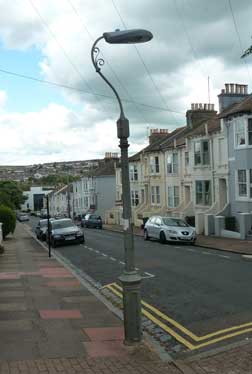 You will see that it has been vandalised, the delightful lantern having been replaced with something more suited to a motorway.

I guess its convenient for the Council's street lighting agent to treat our heritage like this, but is it what we want?  NO - in case you had any doubt.

Please may we have our nice lantern back?