The real Bat and Ball 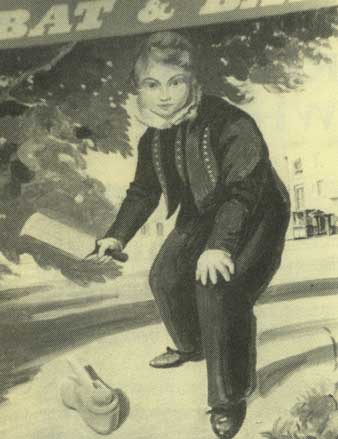 THE casual onlooker when passing The Bat & Ball pub, situated close by The Level in Brighton, could be forgiven for assuming the pub’s name derives from the game of cricket. However, a close inspection of its inn sign reveals a different game being played, that of bat and trap (however, around the corner in Oxford Street, a second and more recent sign does acknowledge cricket!)

The sign commemorates the fact that The Level was, for many years, a popular venue for bat and trap, with many Brighton pubs fielding teams to take part in the regular weekly matches. Sadly, the second world war virtually brought an end to the playing of the sport. Post- war, interest in bat and trap in Sussex was never regenerated (however, Brighton Trades and Labour Club still fields two teams to play the game on The Level every Good Friday, a tradition which began with the club’s foundation in 1916).

Bat and Trap is possibly a more ancient game than cricket, for the first documented mention of it is a reference to a match being played in 1570 at Ye Old Beverlie Inn, in Canterbury, while the first documented mention of cricket was some years later in 1598. Incidentally, while the game in Brighton and the rest of Sussex never recovered from the wartime cessation, bat and trap remains very popular in Kent, where it is believed to have originated, and where today scores of pub teams play each weekend, especially in the east of the county.

There are usually eight players to each bat and trap team. The trap is a rectangular box around 2ft long and 5ins wide. Within it is a miniature see-saw called the ‘striker’, which is spoon-shaped. A hard rubber ball is placed in the spoon bowl. The bat has changed in shape over time and is today rather like an over-sized table tennis bat, though it is made of hardwood and is more bulky. The batsman taps the other end of the striker with his bat, which causes the ball to fly upwards. The batsman then attempts to hit the ball while it is in the air, his aim being to send the ball straight down the pitch to pass between two 7ft high white posts at the opposite end of the pitch. These are 13ft 6ins apart.

The fielding side, which stands behind and between the white posts, can catch the ball in which case the batsman is out, or otherwise can stop can the ball while it rolls along the ground. This entitles the fielding side to hurl, throw or trundle the ball at the trap, which has an extension at the front comprising a 5-inch square wicket, or flap. The flap is usually painted white with a black bullseye. The batsman is not permitted to defend this target flap.

If the batsman fails to strike the ball or the ball fails to cross the line between the posts, or if the ball passes over the tops of the posts, the batsman is ‘knocked out’. Should one of the fielders catch the ball before it hits the ground, the batsman is ‘caught out’. If a bowler strikes the target so that it is knocked backwards and hits the ground, the batsman is ‘bowled out’. If the bowler does not manage to knock down the target, the batsman scores one ‘run’ – although the batsman never actually runs! He then collects the ball, and the process starts all over again. There are no absolute rules for batting and bowling, or even for the number of players in a team. This is a game where enjoyment is more important than regulations or kudos, so local rules tend to apply.
This page was last updated by Ted on 15-Nov-2013
(Registered users | Amend this page)