Insufficient detail in the application

Conditions 10 and 20 should not be abandoned

Application BH2018/00881 further proposes to vary condition 10 ensuring that the appearance of the gatehouse door is in keeping with the conservation area and condition 20 that the development shall not be occupied until the refuse and recycling storage facilities indicated on the approved plans have been fully implemented and made available for use.

It is important that there are proper onsite facilities available to occupants so that their refuse and recycling does not spill over into the street.

Description: Variation of conditions 10 and 20 RE compatibility of gatehouse door with conservation area :

10. Appearance door to be compatible with CA

Condition 10. The development hereby permitted shall be carried out in full accordance with the submitted details of the gatehouse door shown on drawing 1394-P-004-P6 received on 13/03/2017 and shall be retained as such.

Reason: To ensure a satisfactory appearance to the development and to comply with policy CP15 of the Brighton and Hove City Plan Part one and policy HE6 of the Brighton & Hove Local Plan.

20. Implementation of plans for refuse and recycling facilities

and (20) full implementation of plans for refuse and recycling facilities

Condition 20 The development hereby approved shall not be occupied until the refuse and recycling storage facilities indicated on the approved plans have been fully implemented and made available for use. These facilities shall thereafter be retained for use at all times.

Will the Council stick to conditions and a refusal which avoids this? 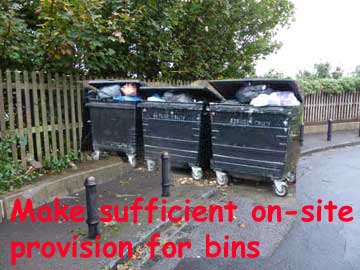 Reason: To ensure the provision of satisfactory facilities for the storage of refuse and recycling and to comply with policy QD27 of the Brighton & Hove Local Plan.

[2] the location of the recycling / refuse / glass stores
from indoor (within the gatehouse) to an outside location.

The developer Carelet has submitted Planning application BH2017/00175 - which was APPROVED on 24th April 2017.

Click here to see the planning decision and conditions of approval.

Carelet explains in their planning note that geo-technical assessment (i.e. investigation into chalk and soil) has indicated that construction of the approved Gatehouse (BH2015/01983) is virtually impossible. 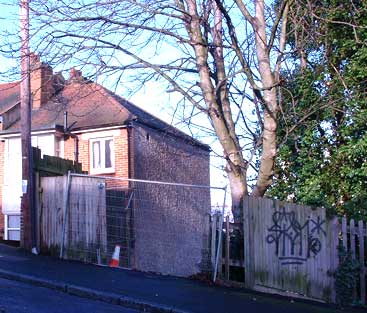 The Gatehouse proposed in Planning application BH2017/00175 would be substantially reduced in size, losing the function of providing indoor accommodation for individual refuse & recycling bins (which could be protected by key) for the  six large  households.

Instead of having individual bins, residents would have the communal use (at street-level) of:

The bins for refuse and recyclables would be outdoors, tucked behind the horse chestnut tree in front of the Gatehouse. The glass bin would be located just east of the entrance to their staircase.

You will need to zoom in on the bottom part of the mid 'Ground Floor' section of Carelet's proposed Gatehouse Plans to see this. The circle (to the bottom right of the diagram) marks the location of the protected horse chestnut tree.

Their diagram showing Refuse & Recycling Layout shows both the bin locations and the capacities.

Carelet has consulted City Clean about the size of the bins.  I felt that the indoor space shown in their approved plan BH2015/01983 would have caused problems. Many local authorities allocate a 240 litre bin per household for recycling, so six of these comes to 1,440 litres.

The outdoor location chosen for the bins would make things more accessible for City Clean - less likely to lead to missed collections and a higher probability that bins would be returned to their site.

The proposal provides for 1,100 litres Recylables + 360 litres glass, so it approximately covers the 1,440 litre provision that I felt would be needed when I objected to BH2015/01983 which (though approved) has proved virtually impossible to deliver. 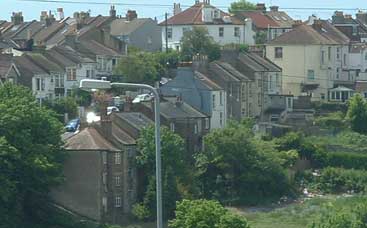 Proposals for which Carelet has already got planning permission all specify that the Gatehouse should have a pitched roof to match the other roofs in the terrace to the NE of Princes Road.

The flat-roofed form of design now proposed would look like an extension to the end-of-terrace (81 Princes Road) and may look ugly in long public views of the conservation area from the NE (e.g. Davey Drive), detracting from appreciation of the stepped terrace of Round Hill's most northerly street.

Abandoning plans for indoor refuse/recycling storage will save the developer a significant amount in construction costs, so it is only right that the developer considers the aesthetic of our conservation area in the design of the minimum they are obliged to provide. Zoom in on the proposed elevations to get an idea of the look. It could be argued that the reduction in the built-area is an improvement and that landscaping could take care of the simpler Gatehouse proposed. There could still be scope for improvement from some angles.

It is possible to comment without either objecting to or supporting a proposal. Concerns may be expressed by suggesting conditions.