UPDATE: Application BH2018/00881 proposing the removal of the car-free condition 8 on the Carelet development was REFUSED.

Removing condition 8 would have given occupants of Carelet's 6 three-storey houses elegibility for residents' parking permits.

If you are fighting an application which you feel would add to parking stress in your neighbourhood, this page and another one of similar detail may be of use.

The document PLANNING STATEMENT (published 20th March 2018) can be opened from the VIEW column on the right.

The history of Car-free condition 8

Condition 8 is attached firstly to the decision on 19th September 2014 to approve BH2013/03782 - the development which has actually been built. The wording of the condition then was:BH2013/03782 Condition 8: The development hereby permitted shall not begin until such time as a scheme has been submitted to and approved in writing by the Local Planning Authority to provide that the residents of the development, other than those residents with disabilities who are Blue Badge Holders, have no entitlement to a resident's parking permit. Reason: To ensure that the development is car-free and to comply with policies HO7 and TR1 of the Brighton & Hove Local Plan.

A similar condition was attached to BH2017/00175.  It lists condition 8, but offers no supporting evidence for removing it. City Plan Policy CP9 on Sustainable Transport replaces Local Plan Policies HO7 and TR1 to justify the need to condition the development as car-free: BH2017/00175 Condition 8: The development hereby permitted shall be carried out in full accordance with the scheme to provide that the residents of the development, other than those residents with disabilities who are Blue Badge Holder, have no entitlement to a resident’s parking permit submitted and approved under application BH2014/03621. The development shall be retained as such thereafter.

Condition 8 was imposed to ensure that Carelet's development (1 two-storey and 5 three-storey houses) is car-free and to comply with policy CP9 of the Brighton & Hove City Plan.

The Special Planning Document called for under policy CP9 is the current set of parking standards SPD14 see page 5 on the zonal approach and pages 6 & 7 on car-free housing.

The path of the coastways railway between London Road and Moulsecoomb stations falls within the purple zone, as do Carelet's new homes.

The above information is missing in the policy background section of the developer's supporting document.

Instead, the supporting document uses a yellow marker on a section of Appeal decision APP/Q1445/W/16/3149109 seeking to undermine the use of Local Plan Policy HO7 to condition development as car-free, even though the main issue of the appeal was permission for part change of use of a ground floor shop and internal alterations to existing residential accommodation. The Council's grounds for refusal made no mention of parking. Appeal Inspector David Walker picked up on the following note in a report by the Council's transport department:[Car-free housing comment] The Highway Authority deems that the proposed development has good access and is near local services and public transport and is within a controlled parking zone; therefore, to accord with the City Council’s Local Plan policy HO7, requests that conditions be attached to prohibit residents from being eligible for parking permits and encourage the development and surrounding area to be genuinely car-free.

To access the above (Section 8: Sustainable Transport) click here. Then (to the left of the green button APPLY) change "Show All" to "Report" before clicking on the green button

10. Lastly the appellant draws attention to the fact that there is no waiting list for permits in the appropriate controlled zone. This is not disputed by the Council.

11. In conclusion, the development has been permitted without parking and this is in line with Policy HO7 and makes best use of land in an accessible location. To ensure that the development stays genuinely car-free, in line with the policy aims and those of national policies on reducing the need to travel, it is necessary and reasonable to prevent occupiers being able to obtain a parking permit, notwithstanding that there appears to be no waiting list. Harm would occur to the aims of sustainable development, and particularly the environmental dimension, in removing the condition, which is also relevant to planning and to the development to be permitted, enforceable and precise. For the reasons given above it is concluded that the appeal should be dismissed.
S J Papworth
INSPECTOR

Without the CPZ (i.e. control of entitlement to on-street parking), Brighon and Hove City Council would not have been able to impose condition HO7 to overcome the parking issue which had prevented Carelet from getting permission for 6 houses. BH2013/03782 - the development which has now been built - was approved on 12th March 2014 under the CPZ.

If Brighton and Hove City Council backtracks on the enabling condition now, would they not be inviting similar applications from dozens of other housing developments in the city which have already been agreed as car-free.

Could they put in retrospective planning applications to have their car-free conditions removed too?

If our city really wants its Sustainable Transport Policy CP9 and Parking Standards SPD14 to create a healthier environment, it would be unwise to create a precedent for going back on car-free conditions to meet retrospective requests once a development has been built.

If every car-free condition in our city were challenged, there would be transport chaos.

Conditions can be used providing they are reasonable and necessary. 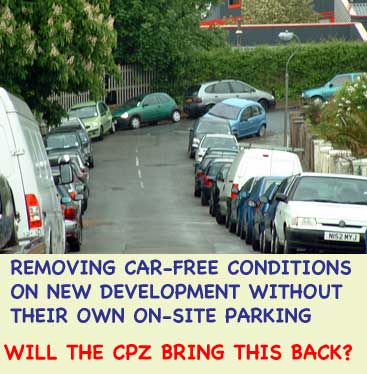 Not if car-free conditions on new development to the rear of our terraces (e.g. Princes Road and Crescent Road) are defended.

On Monday 1st July 2013, streets in Round Hill as well as streets between Springfield Road and Stanford Avenue joined the Area J residents parking scheme.

Did those who voted for Round Hill's Controlled Parking Zone want to see the benefits reversed in order to pay for sustainable initiatives elsewhere?

Read and respond to the developer's supporting document 6.5 The income generated by the City’s controlled parking zones fund numerous sustainable transport projects and initiatives...In an era when funding for Local Government is limited, any income that contributes to these services, no matter how small the sum, should be welcomed by Brighton & Hove City Council.

6.6 It is evident that allowing prospective occupiers the option to purchase a Zone J parking permit, if they choose to, will not create a traffic or transport impact that can be defined as severe. Accordingly, we request that Condition 8 is removed from the planning permission BH2017/00175.

Cars or space for community events

Our Council takes a case by case approach to imposing car-free conditions. Further parking stress would hit Round Hill very hard as we have no other public open space other than our streets to hold our community events.

Although it is now over 10 years old, Manual for Streets (2007) from the Department of Transport [Communities and Local Government] is still widely referred to by architects and town planners concerned with the life of communities and different uses for streets:

1.1.4 Streets should not be designed just to accommodate the movement of motor vehicles. It is important that designers place a high priority on meeting the needs of pedestrians, cyclists and public transport users, so that growth in these modes of travel is encouraged (Fig. 1.1).

1.1.5 MfS aims to assist in the creation of streets that:

1.1.6 MfS discourages the building of streets that are: