2011 attempt to develop the green ribbon

The application was refused by 10 votes AGAINST and 2 FOR

It is common for applicants to minimise the impact of their planning applications, especially when proposals are located in the heart of conservation areas.

However, application BH2011/03323, extends wishful thinking to the extreme in its denial that the proposed development is "in a conservation area per se". It most clearly is

A visual introduction to Round Hill
The application site is within  The Round Hill conservation area's most spectacular green corridor.

Our conservation area character statement details the care taken in the early development of Round Hill to construct a street layout which is still pleasing to the eye with its deliberate arcs, segments and restful 'green ribbons' in between. This remains largely intact.

Overdevelopment through infill in a neighbourhood which already has 2300 residents living within an area of half a square km (double the average population density of suburbs in medium-sized UK cities) will not only increase the pressure on shared infrastructure such as on-street parking, but will rob Round Hill of the very green lungs which allow people living in a tight street network still to have good visual amenity, access to wildlife and feelings of openness & well-being.

Generally, I support developments which respect the environment, but this proposed 2-storey earthship (BH2011/03323) starts a new building line next to a uniquely situated Victorian house, digging a big hole in a greenway which hasn't seen new-build for 132 years, creating a precedent for more new-build to be added at the cost of greenbelt visible from both sides of the Lewes Road valley.

Jan Curry's award-winning wildlife garden (and several other gardens which have been opened for community events and charitable fundraising) is on the same greenway. This long stretch is well visited by residents from throughout our city who participate in Open Gardens events. Designation as a Site of Nature Conservation Importance is well overdue.

Within the applicant's several attempts to minimise what is intended on a plot noted for its trees, lie the main reasons why we should urge Brighton and Hove City Council to refuse it and protect the most substantial 'green ribbon' in our conservation area - something which is unique over a much wider geographical area.

Minimisation strategies
just "an outbuilding"? i. The Public Notice displayed in Wakefield Road mentions "a detached two storey outbuilding". This does not make it clear that the proposal is for "a modern earthship" which will have almost the same footprint as the Victorian house (Fern Villa) which could become its neighbour.

a replacement for "a derelict shed"? ii. In the Design and Access Statement as well as in the Application Form, the proposal to demolish a "derelict garden shed" and to replace it with "a single sustainable Earthship" is made clear. To find out the actual scale of the existing garden shed and the proposed 2-storey earthship we have to open two separate PDF documents:

The former shows a garden shed (existing) which is truly "an outbuilding" in dimensions. The latter shows the earthship (proposed).

However, in the second document, we find that the earthship which was first introduced as "an outbuilding" is comparable in footprint to the two-storey house (Fern Villa) which might be unlucky enough to have the incongruous structure proposed as its neighbour.

some replacement! iii. Few would object to home owners within conservation areas replacing "a derelict garden shed" with "a similarly sized garden shed".

However, in the Design and Access Statement for Application number BH2011/03323, we learn that ""the annex will be used as an office, reading and writing room, studio and for various non-residential purposes including storage, a darkroom and a ping-pong table." The lower floor is connected to the upper by an internal staircase. The front of the building will have solar cells attached for power. We learn on the last page of the Application Form that there will also be a WC.

Access? iv. It is stated within the Design and Access Statement that "the annex will be within a few metres of the rear door of the house".

It does not say categorically that "access will be from the rear door of the house".

Nor is it mentioned anywhere in the Design and Access Statement that there are two points of access to the application site from gateways within the wall of the Cats Creep steps (leading down from the join of Wakefield Rd and Richmond Rd to Roundhill Crescent. These could easily be brought into use, allowing independent access.

what is it and who will end up using it? v. Application BH2011/03323 is notably elusive.
Is what is actually being proposed a "replacement shed", an "outbuilding", an "annex", an "earthship"?

With a similar footprint to Fern Villa, how far off is it from being "a second home"? i.e. an additional house on undeveloped land valued for its biodiversity where building has not been permitted since 1879.

Is this elusive structure really an attempt to start a new residential building line running parallel between Wakefield Road and Roundhill Crescent?

Can the structure really have non-residential uses if the sole access is through the applicant's terraced home?

Will all future occupants share an interest in table-tennis? How might the uses change if they didn't? Would there be bedrooms?

Are the "non-residential" uses quoted somewhat arbitrary given the amount of the proposal and the flexibility as to what the proposed structure could be used for?

Are these "non-residential" uses (storage, ping pong, dark room, office space) sufficient to justify development in the heart of Round Hill's greenway and in the middle of the conservation area?

will the development remain non-residential? vi. When a proposal to replace a derelict garden shed assumes a scale much more indicative of a plan to build an additional house, it is necessary to ask what the uses of the proposed structure would be in the future. Would there be subsequent applications for change of use and separate access to a residential unit, perhaps from the middle of The Cats Creep steps?

It would be difficult for a Council to stipulate that one of the main rooms should only be used for table-tennis and not as a bedroom or living space in the future. In relation to what the proposed development could become, issues such as Design and Access Statement access for emergency and access to public transport remain unadressed.

I took the above picture from Tenantry Down (up near Brighton Race Course) almost a mile away. The windows of the proposed earthship would face east towards where my photo was taken.

However, residents living in Roundhill Crescent, who value the green open space directly to the west of their homes, would not need a zoom lens to see the incongruity of the earthship with its windows and solar cells in line with Victorian Fern Villa.

Fern Villa (1879), as many who have participated in Open Gardens events will know, is uniquely located in the heart of Round Hill's most impressive "green ribbon", stretching almost the length of the conservation area and remarkably free of modern development. The same "green ribbon", a haven for wildlife, contains Jan Curry's award-winning wildlife garden and several other private gardens which have been regularly opened to the public as part of community and charitable fundraising events. 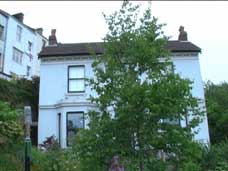 Fern Villa, built in the same 19th century period as the houses along Wakefield Road, well known to the community through Open Gardens.

Character and appearance of Round Hill Granting permission to proposal BH2011/03323 would involve a clash of architectural styles which would be completely incompatible with the Council's Supplementary Planning Document (SPD09) on architectural features as well as the Government Planning Policy Guidance PPG17 on Open Spaces.

Start of a new building line: the beginning of the end for RH's best open space
As well as the incongruity of placing a modern development right next to one of Round Hill's most valued Victorian buildings, starting a new building line next to Fern Villa will spell the end of protection of the only green open space we have in Round Hill. This space is totally within our conservation area and gets a special mention in Round Hill's conservation area character statement.