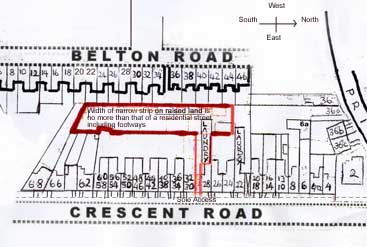 The strip of land had once been the drying field for Crescent Road laundries. It had also been a shooting range, but more recently had been used for light office work, mainly by Geo-Environmental, leaving sufficient soft landscaping to reduce overlooking between Crescent Road and Belton Road properties and to retain some wildlife. This amenity value was enjoyed by at least 37 existing Round Hill properties. The price paid for this property in 2014 was stated then as £425,000.

Very soon after this application for 5 self-contained flats was lodged, the developer decided that it might be a quicker route to attempt to claim permitted development.

Based on the history of the site and previous categories of use, residents put up robust arguments as to why application BH2014/00841 did not qualify for permitted development having sought planning advice from Legal Aid. The Council decided that prior approval of development was required i.e. a full application.

This was followed by a request for a Certificate of Lawfulness (BH2014/01815 28 A, B & C Crescent Road) which was withdrawn before the decision date.

The developer noticed that legislation was rapidly changing to make it easier to get schemes accepted and decided to have another go at avoiding a full planning application. Description: Prior Approval for Change of Use from Offices (B1) to Residential (C3) to form 5no Self contained flats. Residents continued to study planning law and argue their case. BH2014/03343 was also refused.

A second full planning application followed, which was not withdrawn: Part demolition and conversion of existing commercial buildings and erection of two new buildings to provide 3 no. two bedroom houses, 1 no. two bedroom flat and 1 no. one bedroom flat. However, the amount of accommodation was deemed excessive.

With failure to justify permitted development and a full application for planning refused, the developer showed greater willingness to liaise with local residents.

Towards the end of a planning committee meeting lasting circa 7 hours, BH2016/00862 was approved without any debate. The nature of the application site lent itself to complicated presentation, though it seemed that members of the planning committee had already decided to support the officers recommendation to grant. One who had to leave before the vote was taken was confident that it would go through. Such is the pressure on meeting housing targets. Protecting open spaces on private land has now become an enormous challenge no matter how great their amenity value is to numerous existing residents.

Having taken almost three years to get full planning permission for 4no two bedroom houses which clearly did not meet the approval of local residents, the outcome was that the developer did not want to build his own scheme:

This application came to planning on Wed 7th November 2018

See The Round Hill Society's objection and other comments from local residents.

Parking surveys have been carried out on behalf of different developers for two application sites approximately 200 metres apart in Round Hill within the past year. The aim of both surveys is to persuade members of BHCC's planning committee that car-free conditions on the developments mentioned below should be removed The surveys claim to demonstrate that removing the car-free conditions will not have any adverse impact on highway safety, or capacity, that can be considered as severe or be contrary to the relevant local and national policies. See

More online objections are needed: Just emphasizing one of the counter arguments (e.g. "BHCC Highways disclosure that permit update in the Area J Parking Zone has been running at 92% during past 12 months") would cast doubt on Reeves' optimistic estimates of on-street parking demand based on 2011 population census data (a partial & out-of-date measure).

UPDATE: Our Council refused The Crescent Rd application See Decision on Application BH2019/00072 document dated 29 March 2019, but note also that the developer has launched an appeal. Read the developer's arguments at the latter link. You can respond to these arguments and take part in the appeal online at https://acp.planninginspectorate.gov.uk. You will need to enter the last seven digits of appeal reference: APP/Q1445/W/19/3231412 on the Planning Inspectorate's site to find the relevant case on which to comment.

Land to the rear of Crescent Road: click on the picture for an analysis from Dominic Furlong on inaccurate use of figures in the parking survey for application BH2019/00072. 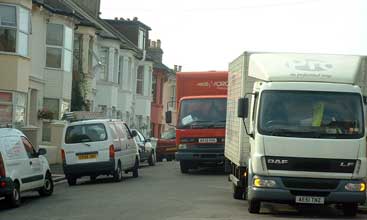