UPDATE: an agreement involving purchase of a strip of land adjoining No. 4 D'Aubigny Road looks as if it will prevent future applications to create a new end-of-terrace house. Hopefully, this will settle this long-running planning dispute and the long view will remain intact.

Planning inspector S J Papworth from The Planning Inspectorate has DISMISSED the appeals against refusal of:

Review the planning committee meeting on Wed 12th October 2016 where members reversed the officers' recommendation to approve the applications BH2016/00752 / BH2016/0073 and refused them instead.

In his decision dated 7th August 2017, the inspector concluded that 21. whilst the significance of designated heritage assets would be harmed, the level of this harm would be at the lower end of the long 'less than substantial' scale and the public benefits would outweigh that harm as provided for in the (National Planning Policy) Framework.

22. However, the now nearer proximity of the rear wall to the only part of the garden available to the occupiers of the second floor flat at 103 Roundhill Crescent would cause harm to the outlook from the garden and the wall at a higher level would appear intrusive and overbearing. Whilst not identified by the Council, the risk of privacy being compromised adds to the conclusion that the rear of the proposed dwelling would be harmful in the terms set out in Policy QD27 and would not be of the standard sought in the Framework. For the reasons given above it is concluded that Appeal A for planning permission should be dismissed.

23. In the absence of the benefits that had been weighed in the balance with regard to the harm to the listed ‘bungaroosh’ wall, the proposed work would fail to accord with Policies HE1 and HE6 or the stated sections of the 1990 Act and the work that is the subject of the listed building appeal should not be permitted. For the reasons given above it is further concluded that Appeal B for listed building consent should fail.

Since 2014, there have been three planning applications to erect a house in this sensitive position, causing great concern to neighbours as well as residents who feel that a very densely populated conservation area with no public parks, recs, woodlands etc needs to preserve its green vistas and long views to neighbouring hills. 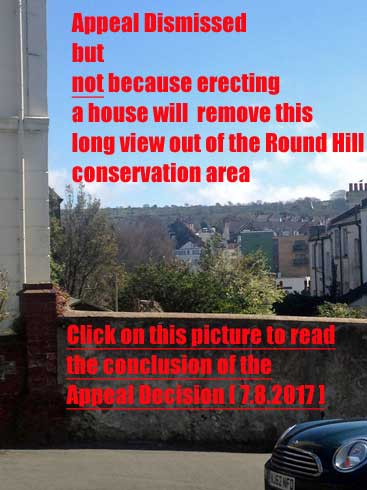 The long view (pictured above) has got a reprieve, but only because the rear of the dwelling proposed in application BH2016/00752 is judged by the planning inspector to risk compromising the privacy of the occupiers of the second floor flat at 103 Roundhill Crescent.

If there are features which residents feel define the amenity of our conservation area, there is an urgent need to ensure that Brighton and Hove Council writes them into The Round Hill Character Statement so that they can be given weight in planning decisions. Our Character Statement was last revised in 2005.

Reasons for the refusal

As such the proposal would have a harmful impact on neighbouring amenity and is contrary to policy QD27 of the Brighton & Hove Local Plan.

The appellant's reasons for the appeal

If you click on BH2016/00752, change "show all" to "appellant's case" and then click the green button "APPLY", you will find the 19-page document from the appellant arguing her case to build the house. The basis of the appeal will be whether the Council's grounds for refusal were correct.

The concerns of those opposing the scheme

Choose any of the links below to review the concerns of those who want to see the appeal dismissed and the refusal remain:

the loss of sunlight affecting neighbours' gardens and homes

the long public view out of the conservation area

the need to keep a significant stretch of historic wall intact

what the heritage statement actually says

what the heritage statement leaves out: was there ever an intention of building a No 2 in the gap originally?

How much building can we cram in
to plug up our historic greenway?

This "ribbon of mainly garden" illustrated above and below is actually a section of one of Brighton's longest  green corridors starting in The Old Steine, continuing through the Valley Gardens conservation to The Level, cutting through the green open space bounded by Park Crescent (see MAP) and forming the central green belt of The Round Hill conservation area as it threads its way to The Cat Creep and beyond, across the south end of Ashdown Road and into the gap fronted by the historic bungaroush wall at the south end of D'Aubigny Road. It connects with Woodvale Crematorium on the other side of The Vogue Gyratory so the green open space continues through Tenantry Down to Warren Road near Brighton Race Course. 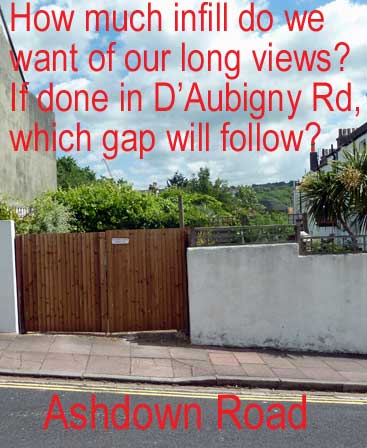 See How we stopped long views at the other end of D'Aubigny Road at the junction of Richmond Road being plugged by a 5-storey 138-room scheme [dedicated accommodation for overseas students].

1) to protect the long view out of our conservation area to the ridge above Tenantry Down. Public views can be protected under planning policies and this one - seen at its best from outside 3 D'Aubigny Road - extends across the vista of back gardens belonging to several listed properties at the east end of Roundhill Crescent.

2) to protect the amenity of neighbouring properties. The back gardens of the listed properties would lose afternoon sunlight. The rear facades are already very busy as some are divided into flats. Filling this much needed open space would box them in. The gain would be a single-fronted house with poor living conditions. The trade-off for getting sufficient light into the proposed house is loss of privacy and overlooking for neighbours. Several of the neighbouring flat-dwellers access their homes via the rear of the listed properties with frontages on Roundhill Crescent. New occupants of the proposed house would have very little outdoor amenity space.

Background to the Refusal
and previous campaigns

Most members of the planning committee attended a site visit on the afternoon of Tuesday 11th October 2016.  The weather was quite sunny, which highlighted concerns about "loss of light" if new-build in this sensitive location was approved. Cllr Lynda Hyde's account of what she observed during the site visit convinced most members that the proposed house would be very damaging to the amenity of No 4 D'Aubigny Road and No 103 Roundhill Crescent as well as to the Round Hill Conservation Area which would lose a much valued long public view. Cllr Hyde was able to quote policies -

Click here to see the reasons for refusal included in the planning decision.