Sample objection in response to the Appeal Statement.

The applicant who was refused planning permission for BH2021/02065 | Erection of 1no single storey, two bedroom dwelling (C3) to the rear of the large 1860s semi-detached Victorian mansion (now divided into 5 flats) has launched an appeal.

The period of consultation ended on 26th April 2022.

The appeal reference number is:

Both this and the appeal correspondence (11 comments) are posted here on Brighton and Hove City Council's Planning Register.

It is a 19-page illustrated document posted by BHCC on 4th January 2022, though the appeal start date is given as 22nd March 2022.

On the same page of BHCC's Planning Register, you can access the 11-page Officers' Report presented when they decided to refuse planning permission, the 3 online comments supporting application BH2021/02065 and the 55 online comments objecting to it.

The appeal statement is mainly a response to BHCC's three reasons for refusal.

1. The proposed scheme would be an intensive form of development. Due to the large footprint and siting of the proposed dwelling and close proximity to the boundaries of the site, the development would appear cramped and would not maintain the verdant character of the conservation area. The proposed scheme is therefore contrary to policies Policy QD27 of the Brighton & Hove Local Plan and Policies CP12, CP15 and CP14 of the Brighton & Hove City Plan.

2. The proposed scheme would provide a poor standard of living accommodation for future occupants by virtue of the dark and gloomy communal living space and limited bedroom sizes, resulting in cramped and oppressive living accommodation. The proposed scheme is therefore considered contrary to policy QD27 and HO5 of the Brighton and Hove Local Plan.

3. The proposed scheme is considered to be an unneighbourly form of development, resulting in increased noise disturbance and sense of enclosure and reduced private amenity space. The proposal has an overall negative impact on neighbouring amenity, contrary to policy QD27 of the Brighton and Hove Local Plan.

Support the reasons for refusal,
but add what is missing

While it is generally helpful to feed the planning inspectorate with comments which support the Council's reasons for refusal, it can also be productive to raise issues such as parking, ecology and heritage. BH2021/02065 lacks detail in these areas.

BHCC's Sustainable Transport objects to BH2021/02065 since no car parking is provided for the new dwelling and this is likely to result in overspill parking on the highway. See page 5 of Officer's Report. The application offers no parking survey (in line with the Lambeth Methodology) demonstrating that there is adequate capacity and not significant parking stress in the area.

Ecology: BHCC's Ecologist's report is disappointing: i.e. desk-based rather than on site. It fails to mention that the applicant has not undertaken a Nature Conservation Survey. SPD 11 Nature Conservation and Development confirms that such a survey must be carried out by a qualified ecologist taking account of any nature conservation features within the development site and wider area. The Ecologist's report focuses, narrowly, on designated nature conservation sites. That is not how the City Plan and other guidance defines nature conservation features and the 'green network', which includes non-designated areas and areas with the potential to contribute to the network. Text accompanying City Plan Policy CP10  Biodiversity (para. 4.133) confirms 'The South Downs Way Ahead Nature Improvement Area (NIA) includes all of the city's Green Network and much of the surrounding downland'. The aims of SPD 11 (not mentioned in the Ecologist's Report) include: 'To ensure the Local Biodiversity Action Plan (LBAP)3 and the Brighton and Hove Green Network is fully integrated into the local planning process.' SPD11 confirms the green network includes 'land suitable for habitat creation to meet local, natural green space and LBAP targets. SPD11 para. 2.6 confirms: 'Many nature conservation features occur outside both designated sites and the Green Network. To be sustainable, it is important that the development identifies, conserves and enhances such features. A plan taken from the report 'A Green Network for Brighton & Hove Final Report of June 2009 (cross referenced in the City Plan) shows Richmond Road as a 'Connection Zone' connecting areas designated as part of the 'Green Network', including the communal gardens south of Richmond Road.

Heritage: Note the absence of content & depth in the applicant's Heritage Statement. Although the 1860s semi detached Victorian villa is not listed, it was one of the very early properties in Round Hill. In autumn 2020, the neighbouring villa at 9 Richmond Road offered a fascinating display of the property's heritage as part of Round Hill's Heritage Open Days event.

9 Richmond Road is one of the semi-detached villas in Richmond Rd
Click on the picture below to enlarge. 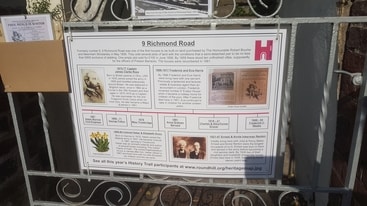 Above is a beautifully designed display prepared by the householder at 9 Richmond Road as part of 2020's Heritage Open Door Days - a self guided tour of parts of Round Hill to discover an eclectic collection of local history. It presents a timeline of previous occupants looking at four sets of them in some detail. Among the four is Colonel Heber Drury (see his Wikipedia entry). The longest occupants (1921-47) were Ernest and Annie Renton.

For example, in section 4.5 of the appeal statement it is claimed that both Heritage and Planning Officers agree that the proposed design is appropriate for the garden context and that there is no objection to the principle of built form in the garden.

The reality is (Heritage comment from the Officer's Report) that "there is no objection to the principle of built form in the garden (such as a garden room) but not for a dwelling. In addition to the principle not being acceptable the footprint is also too large, being comparable in size to the original house, and the proximity of the proposed house to the side boundary wall, if it is an original flint wall it would inevitably be lost. If a garden room was proposed, clarification would be sought regarding loss of boundary treatment."

Click here for
a a sample objection in response to the Appeal Statement.