The Future of Brighton General

Credit for historical picture: The Royal Pavilion and Museums 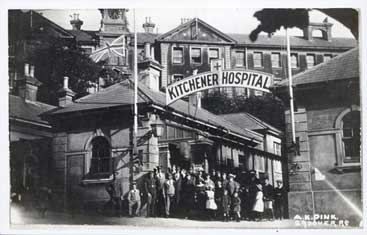 Thank you to Andrew Partington for this update. As well as being on The Round Hill Society committee, Andrew is a public governor of the Sussex Community NHS Foundation Trust and as such helps to ensure that the board takes account of local people’s views.

The following is Andrew's summary of the the Trust's Board Meeting, which he attended in his capacity as public governor on 25th October 2018

The redevelopment of the Brighton General Hospital site is one step closer today (25 October 2018). A proposal to build a new NHS clinic there for a wide range of outpatient services, and release most of the rest of site for housing, now starts its detailed design phase.

Subject to NHS approval and eventually planning permission from Brighton and Hove City Council, the new NHS clinic, with a frontage on Elm Grove, could open in 2023.

Brighton General is owned by the Sussex Community NHS Foundation Trust, part of the NHS. The last inpatient beds there closed in 2009 and since then most of the Victorian buildings have been standing empty.

For the last six months the trust has been talking with patients and local residents about ideas for the redevelopment. It has to take into account the fact that there will be no central government money for the scheme, meaning that the new clinic, which they call a ‘community health hub’ has to be funded by the proposed new housing on the site.

The NHS in the city is also clear that inpatient services must be concentrated at the Royal Sussex County Hospital, a mile away from Brighton General.

The new clinic would be where the Elm Grove ambulance station is now (this would have to move) and also where the existing Sussex Rehabilitation Centre is - this would not be re-used as it is too old to be refurbished, so rebuilding the Centre elsewhere on the Brighton General site both improves conditions for its patients, and clears the space for the new health hub.

Today the board of Sussex Community NHS Foundation Trust agreed to start detailed work on the proposal. There is around two years’ work to complete the design and planning stages, select a developer to take on the housing element, and get the necessary NHS and city council approval. The earliest date for building to begin is some time in 2020 with the new health hub - the final part of the project - opening in 2023. The board made a commitment to keep working with patients and local residents.

The trust has more information about the proposal, and its importance to NHS in the city, on its website: www.sussexcommunity.nhs.uk/about-us/brighton-general-community-health-hub.htm.

See also page 6 of June 2020 issue of The Round Hill Reporter where the potential listing of the Brighton General Hospital site as a conservation area is discussed.