You may also like to read about Ashdown Road in 1891

After some loss of amenity related to the use of

Ashdown Road has returned to being a very pleasant street.

To what do we owe its attractiveness? Take a look at the

You can trace Brighton's longest greenway by clicking and dragging on the Google Earth map. Trace the "green ribbon" to the jack-knife junction of Wakefield Road and Upper Lewes Road. Then hop across the busy A270 into the generous pool of greenspace (bounded by Park Crescent and Union Road) proceeding to The Level. Then continue past St Peter's Church and Gloucester Place into the Victoria Gardens. Alternatively, head in the opposite direction tracing the green vista to the north side of Roundhill Crescent. There is a similarly generous gap at the south end of D'Aubigny Road, which allows public views into Woodvale (a continuation of this long greenway) up to Tenanty Down and the ridge near the Race Course.

Happily, a similar gap at the S end of D'Aubigny Rd remains unfilled 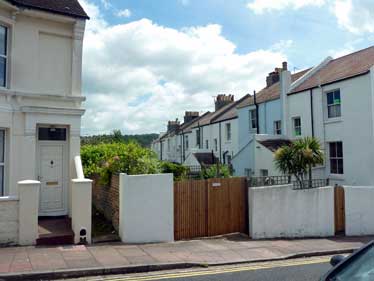 Notice how the gaps between the terraces at the four corners of Ashdown Road continue Round Hill's longest green vista (some say this greenway starts in Old Steine) and facilitate long views into and out of the conservation area from public places, including Ashdown Road itself.

Some would have preferred the garden of 2 Ashdown Road to remain part of a spectacular greenway, as it was when the property was a laundry, but many people's homes result from infill.

The buyer of the property applied for planning permission BH2008/02170 while simultaneously renting the site to Raj Motors before the proposal came before the planning committee. 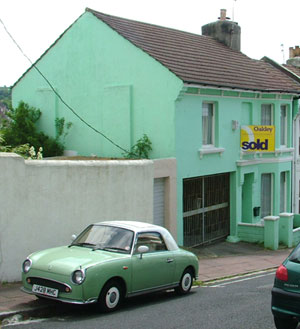 5 units of accommodation where currently there is 1!

Conversion of the existing dwelling at 2 Ashdown Road Brighton to form 3 self-contained flats.

Demolition of 11 no. garages and erection of 2 new dwellings

The decision to let to the Car Sales company created some disruption and neighbours voiced several concerns about the use of their street and the 11 garages to the rear of 2 Ashdown Road:

The property was rented to Raj Motors and for circa 2 years, both the yard within and an unreasonable amount of on-street space in Ashdown Road resembled a car show-room. Late in 2008, the City Council’s Planning Enforcement office confirmed that the company was acting without the required planning permission. An Enforcement Notice was served in March 2009 requiring the company to obtain official permission or seek a new location. By the end of July 2009, the site had been vacated and Raj Motors - still thriving as a business during a time of recession - re-located to Pelham Terrace on Lewes Road.

As there was no CPZ then, the Council could not control on-street space through residents permits, though there was a regulation on the number of cars for sale which could be parked within a limited stretch of street. There were other reasons for Raj Motor's departure: i.e. a planning application to make different use of the site. There was a suspicion among some residents that the presence of Raj Motor's was acting as a lever for getting different use of the site approved.

Planning application BH2008/02170 came before the planning committee on 25th November 2009 and permission was granted on 6th October 2010.

The first developer did set about division of 2 Ashdown Road into three flats without building the two small sunken houses which the permission also covered.

However, the permission was not fully used until another buyer, Carr Developers of Eastbourne, purchased the remaining part and the space for constructing the two new houses in September 2013.

There are also a number of other “underpass” or integral garage type properties with vehicular access to the rear garden, within the Round Hill / Upper Lewes Road area. These properties include, but are not limited to, 47 Richmond Road, 56 Roundhill Crescent, plus 52, 55 and 57 Upper Lewes Road. There are substantial areas of gardens and small garaging areas in the areas between the buildings. In the Round Hill Conservation Area character statement, these are described as “Round Hill’s green ribbons” and although not visible from the wider street, their largely undeveloped character contributes positively to the overall character of the conservation area.

Proposals and their effect on the conservation area:

The plot of land behind number 2 Ashdown Road is previously developed, with a number of now derelict garages. There could be scope for a new, carefully designed building in this location, however the proposed new buildings are of a larger scale, in terms of height. Because of this height, the proposed building appears bulkier than the existing garages. There is also some concern that 3 dwellings in this small backlands site would be an overdevelopment of the area. A maximum of two, or preferably one new.

Green ribbons which are visible from public vantage points stand a greater chance of protection from infill. Land to the rear of 28 Crescent Road - another ex laundry site and drying field - has also had infill approved. However, this is not a reason for complacency. It would be nice to believe that The Round Hill Society's / local residents' representations have had some influence: e.g. Cats Creep applications, saving Richmond House from demolition, limiting the amount on the Carelet site from 33 flats in 2004 to 6 houses (even though the latter are three storeys tall and occupy a large footprint of the site).

Permission for BH2008/02170 was granted on 6th October 2010. The first developer carried out the division of the house into three flats, but not the construction of the two small sunken houses. Therefore permission for proposal BH2008/02170 was not fully used until Carr Developers of Eastbourne (a second developer) bought the site in September 2013.

Note that The Council lists applications for Discharge of Conditions for information only, as there is no legal requirement to publicise them. They are not for comment or consultation.

Having converted the existing dwelling to form 3 self contained flats, the first developer sold on the unused part of his 6th October 2010 permission  BH2008/02170 to erect two new dwellings in place of the 11 garages self-built (though not to a high standard) over many years on the green vista bounded by Ashdown Rd & parts of Richmond Rd and Roundhill Crescent.

Offers were invited "from £320,000" for both the land and full planning permission for two three bedroom detached eco homes of which one comes with a garage and the other with two off road parking spaces. The permission is due to run out on 6th October 2013. If work on the two houses has not commenced by then, then the developer (now Carr Developers of Eastbourne) would need to apply to Brighton and Hove City Council to extend the permission before proceeding with construction.

Carr Developers of Eastbourne (a second developer) bought the site in September 2013 and planned to start building two small sunken houses in October 2013.

Though glad to see the garages go, many residents felt that "five dwellings where there was one" puts too much pressure on an already densely populated area.